Where the Somali Pirates Operate and Why

Some people ask, "How do the Somali pirates know where the ships they hijack are going to be?"

There have been allegations of the selling of sailing plans by industry insiders to Somali pirate spies. Not much evidence has been proffered to support that theory, but there may be some truth in it. Another allegation is that the pirates are using Automatic Identification System (AIS) signals to track targets. Others assert intercepted radio signals are being used. All of these assertions may be true in part.

I would argue, however, that the most common way Somali pirates find ships is by the pirates planting themselves on known shipping lanes. Here, let me illustrate: 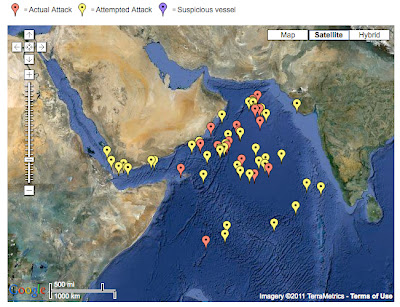 Then, from a draft EU MSC(HOA) and ISAF yachting safety guide (see here), a "snapshot" of 2010 shipping in the Indian Ocean, Gulf of Aden, Arabian Sea area: 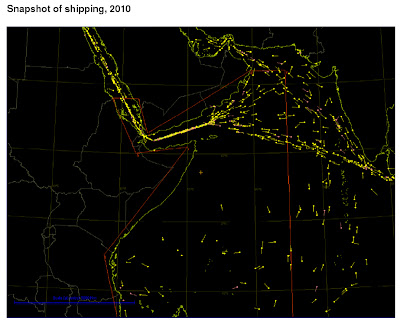 Now, with a little Photoshop magic, I combine the two (as well as I can, given the scales and other differences): 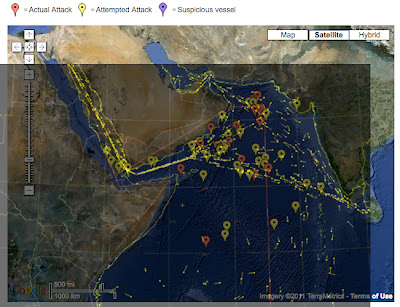 What do you end up with? It shouldn't be a surprise - the pirates mostly attack shipping in the heavily trafficked shipping lanes.

Which answers the "where." The "why" is answered by that old Willie Sutton line about why he robbed banks, "because that's where the money is."

Apply "Sutton's Law" to the Somali pirates and the "why" question about where they strike is evident. "That's where the ships are."

Now, how do counter-pirate forces find the pirates who are going to attack ships? Figure it out for yourself. It's not complicated.
Posted by Mark Tempest at 2/25/2011 10:43:00 AM