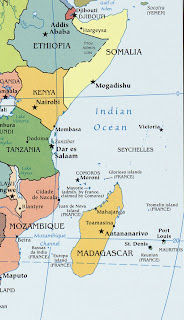 Following up on a previous post, it's good to note that Madagascar's navy has pulled to shore a Somali pirate "mother ship" along with some hungry pirates, terrorized and abused hostages and crew, as reported in Madagascar navy rescues pirate-seized vessel:


Madagascar's navy Sunday towed into Antsiranana port a hijacked Comoros-flagged vessel almost a week after its captain and two suspected pirates arrived on the island to seek help, an official said.

The MV Zoulfikar was captured by Somali pirates in November while on its way to Tanzania from the Comoros. It had 29 people on board -- 20 passengers and nine crew.

On Monday, six people arrived on a small boat at Madagascar's northern Antsiranana port to seek help. Among them were the MV Zoulfikar's captain and two Somalis suspected to be pirates.

"It was a rescue operation. There were no clashes. The suspected pirates were not armed and they gave themselves up immediately," Rolland Rasolofonirina, the coordinator of Madagascar's anti-piracy efforts told AFP.

"There were 37 people on board, 12 of whom are suspected pirates. The 25 passengers are from Madagascar, Tanzania and the Comoros and three of them are women," Rasolofonirina said.

The three women, weakened by their four months in the hands of the pirates, were given medical treatment as soon as they were transferred to the Madagascar rescue boat.

All of those aboard are being detained by the authorities in Antsiranana's military port.

"We are in the process of deciding on the procedure to be followed ... so that prosecutions can take place," Rasolofonirina said.