Somali gunmen boarded the MV Semlow, registered in St Vincent and the Grenadines, on June 27 and took the crew of 10 hostage, the statement said. The captain of the vessel is Sri Lankan, the engineer is Tanzanian and the remaining eight crew are Kenyan.

The ship was carrying 850 tonnes of rice donated by Japan and Germany for tsunami victims in Somalia.

The 10-member crew onboard when the MV Semlow was captured by gunmen on Monday morning between Haradhere and Hobyo, some 300km (190 miles) northeast of capital Mogadishu, are reported to be safe.

"The hijackers are asking for $500,000 but we've told them we're just a small boat with relief cargo to feed your Somali people," Inayet Kudrati, director of the Kenya-based Mokatu Shipping Agency which leased the ship to the UN, told Reuters news agency.

General map of area: (red lightning bolt is in vicinity of this and another attack) The food was destined for people who are ``still trying to rebuild their lives'' after the tsunami, WFP spokeswoman Rene McGuffin said in a telephone interview. Waves devastated coastal areas around the Indian Ocean following an earthquake off Indonesia, killing about 300 people in Somalia and leaving 28,000 people still dependent on food from the UN.

``This food was enough to feed them for two months,'' McGuffin said from Nairobi, capital of neighboring Kenya. ``When you lose everything, including your fishing boats, it takes time to rebuild.'' The WFP is appealing to local leaders and elders to intervene and secure safe passage for the ship, she said.

``It's against humanitarian law to hinder the passage of humanitarian assistance,'' the spokeswoman said. ``This is important food that needs to get on its way (source)

I think what follows is the MV Semlow involved here: 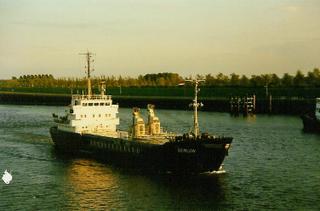