Thanks to Andrew Samwick at Vox Baby, I am now aware of (a) the Econbrowser site in general and and (b) its producer,Professor Hamilton, in particular. This good professor points out some problems with gas prices here:

An even bigger concern may be the effect that this market segmentation has in combination with two other developments. The first is the fact that over the last quarter century, half the refineries in America have shut down and no new ones have been built. The second is the number of mergers and acquisitions that we have seen in the petroleum industry over the same period. The result of the three developments together is that there are substantially fewer suppliers of wholesale gasoline available to any particular local market.

He also reproduces a nifty Exxon-Mobil chart showing the balkanized gasoline markets caused by differing standards of air quality across the country - which also contributes to the increased price of gasoline...I love the map! (click on it to make it bigger) 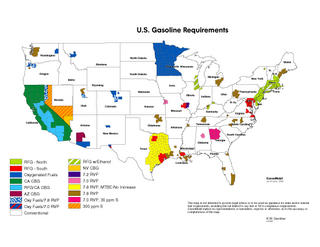