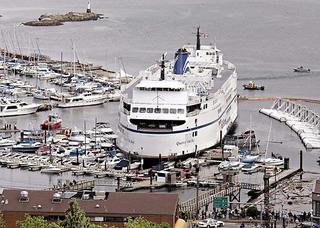 Photo source
A Canadian ferry lost power but not momentum and caused boat owners some problems as reported here.

Witnesses said the 7,000-tonne Queen of Oak Bay missed the terminal berth and was blowing its horn as it crashed into Sewell's Marina.
Passenger Shawn Atleo was on the bow when the 140-metre-long ferry lost power.
"There were sailboat masts that were disappearing under the bow," Atleo said.
"I saw at least two people literally running for their lives from the oncoming ship. They obviously heard the horn and I could see the look of shock on the man's face as he looked up, saw what was coming."
The blaring ferry horn made staff at the Boathouse Restaurant look up in time to see the boat careen into two fingers of the massive marina dock.
"It took out some big boats, sailboats 30 feet long," said cook Bryn McArthur.