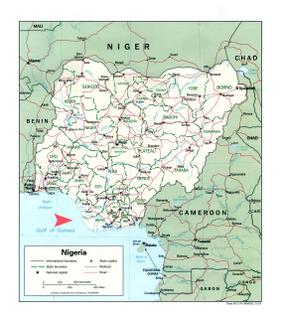 Go to ONI World Wide Threat to Shipping and click on the date.

1. NIGERIA: A press report dated 21 Jun states that vessels are being urged to exercise extreme caution and to stay at least 20 km off Lagos Roads at night, only reporting back during the day once their pilot booking has been confirmed. This follows recent piracy attacks on Lagos Roads, one involving serious injury to a crewmember. There has been an increase in maritime armed crime in Nigeria recently, including four incidents since 24 May around the fairway buoy off Bonny River, and the hijacking of an offshore processing tanker. Consequently, the Presidential Implementation Committee on Maritime Safety and Security has increased security to Level 2 (LL, IMB).

See my earlier post that includes information on the offshore processing tanker here. It should be noted that the attacks off Nigeria are of two distinct types - some are routine robbery and some are "economic terrorism" in that local residents occasionally seize a ship or oil platform in order to force the oil companies "share the wealth" with the impoverished locals. A number of oil companies have entered into agreements with these forces ... more later on this in an update.

Update: Here's a good summary of the mess Nigeria's oil area is in

Security problems in Nigeria increased with the exit of its military dictatorship, which firmly controlled the various tribes within the country. Political and ethnic strife in the Niger Delta region, including violence, kidnapping, sabotage and the seizure of oil facilities, often disrupts Nigerian oil production. In December 2004, SPDC and ChevronTexaco suspended Nigerian oil exports of 134,000 bbl/d due to unrest in the Niger Delta. In January 2005, ChevronTexaco announced that it was losing 140,000 bbl/d of oil due to the closure of facilities in the Niger Delta.

Discontent within oil-producing communities has grown due to a perceived lack of transparency in the government's management of oil revenues. In February 2005, Human Rights Watch released a report on violence in the Niger Delta, calling for increased transparency in "oil producer-community relations" through increased area police forces and provision of assistance to the displaced. Because of suspected corruption in the NNPC, its budget will be included in the federal budget beginning in 2006. A World Bank report released in October 2004 indicated that up to 80 percent of revenues from Nigeria's oil industry accrue to only one percent of the general population. In January 2005, two Nigerian Navy admirals were convicted of facilitating the theft of an oil tanker in August 2004, confirming long-held suspicions of theft of crude oil for profit, with navy officers often colluding with criminals. In the same month, Nigeria's Economic and Financial Crimes Commission (EFCC) began to investigate allegations of tax evasion by multinational oil companies in collusion with government officials. In February 2005, the Nigerian government began an investigation into the illegal existence of 193 unlicensed airstrips and helipads operated by large multinational oil companies.

NNPC estimates that from January 2004 to September 2004, 581 cases of pipeline vandalism were recorded. In December 2004, an explosion at a petroleum products pipeline in Ilado attributed to pipeline vandals resulted in the death of 26 people. As a result of frequent attacks on oil and electricity infrastructure, the Nigerian Legislative Committee proposed an anti-vandalism law in December 2004, outlining penalties including life imprisonment for the crime.

Recent violence between Ijaw groups in Warri is thought to be part of a struggle over which group will receive compensation from an oil spill that occurred in 2003. Youths have also taken violent action when denied employment with multinational oil companies, and kidnappings have been carried out to demand payments from the firms. In September 2004, the People Volunteer Force, led in the Niger Delta by Mujahid Dakubo-Asari, warned oil companies to leave the region, causing the international price of crude to rise dramatically. In October 2004, the Nigerian government began negotiations with Asari over demands concerning the control of resources. In December 2004, militants took 75 oil workers hostage in the Niger Delta region, attacking several oil flow stations and gasoline stations and calling for better infrastructure and welfare for the local population. In February 2005, Nigerian security forces killed up to ten unarmed Ugborodo protestors at the Escravos oil terminal. Members of the Ugborodo community entered the facility following failed negotiations with ChevronTexaco regarding employment issues.

In both January and February 2005, after unsuccessful talks with the government, NUPENG and PENGASSAN renewed a commitment to strike in southern Nigeria due to the refusal of several firms to fire officials accused of insulting behavior during wage negotiations. Nigerian strikes have pushed up international oil prices. Coupled with strikes are layoffs by both NNPC and the oil majors. In December 2004, NNPC laid off 2,355 workers. PENGASSAN alleged that layoffs were also taking place at Shell Petroleum Development Company (SPDC), ChevronTexaco, Halliburton, and Belbop as well.

He assured that the state government would find a solution in which the companies would be more friendly with the host communities, vice versa.

The SSG dropped the hints in Warri when he played host to the German Ambassador to Nigeria, Dr. Dietmar Kreusel.

On the kidnapped oil workers in Bayelsa State, Uduaghan told Kreusel that "you heard somthing today about a firm, we are already working on it although it is outside the shore of Delta State, but the same Niger Delta, we cannot leave it alone."

He advised oil companies that wherever they are moving around Nigeria Delta waterways, they should ensure that they do so with tight security.

"Before any movement, we advised that they should inform security agents that are here and they will give them some security. Although the crisis is down, we still have sea pirates locking (sic -lurking) around the palce and somtimes they can cause problem," he said. (source)

Update3: Of course, there is this cheery assessment:

Construction firm Julius Berger Nigeria Plc has said that it pays at least one million naira for each ship that is allowed to "come up the river" unmolested by youths operating along the Warri water ways in Delta State.

A top official of the firm also said that armed soldiers and Naval personal deployed to escort the company's vessels are often the first to take to their heels sighting pirates, hence the resort to settling the youths.

The company's materials coordinator, Mr. Jurgen Jahuke disclosed this in Warri over the weekend.

Jahuke who said that Warri is the coordinating base for all Julius Berger's logistics operations, added that the practice is to ensure that the company's imported materials, including vehicles are not vandalised.

Although Yahuke admitted that the situation has calmed down along the waterways with regard to the activities gun totting pirates, the insisted that the only gurantee against resurgence was to "send some money down the river so that the ships could come up the river to the port unmolested".

On why military escorts were not used by the company as deterrent against the pirates, Ahuke condemned such resort as ineffective and some of the soldiers as "useless".

He said that it had become the experience of the company to know that at the slightest hint of trouble, the soldiers and naval personnel atached to the vessels were normally the first to take to their heels. (source)