Headline: Japanese love affair with Guam, Saipan cools Ouch. Particularly when comments like this are made:

"There's absolutely nothing you can say that sets them apart from other places," Yuji Shimokawa, a travel writer, tells Nikkan Gendai (June 22). "They lack high-grade hotels, and the local food tastes awful. There's no culture to attract visitors.

And here's some stuff the Guam Tourism Bureau probably won't be happy with, either:

The islands have also proved less than satisfactory for holding overseas weddings, which in Japan's case constitute a major portion of the travel market.

"There are lots of problems," says a wedding organizer. "It's hard to obtain the food items that are easily available in Hawaii, for instance. There are regular power outages, and due to the steamy climate, the bride's floral bouquet will often begin to wilt. The flight time from Japan is short, and it's popular with people traveling with kids," he shrugs, "but otherwise, there's nothing."

Another problem, Nikkan Gendai finds, is that the two islands have failed to redevelop their facilities to appeal to travelers the way Bali and Phuket have managed to market themselves as exotic tropical resorts.

"The accommodations remind you of the run-down rural hotels you see in Japan, designed to put up large groups," says travel writer Teruno Watanabe. "All they do is put a damper on a beautiful view of the sea."

If the decline in visitors to Guam and Saipan continues, author Shimokawa remarks, "at least they'll be able to truthfully boast of being quiet, uncrowded islands." 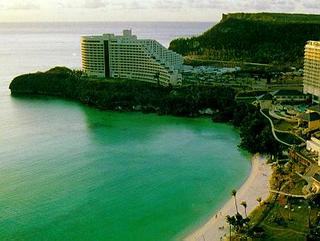 Update2: Saipan, on the other hand has a distinguished visitor: The Emperor of Japan is there to honor the dead from the great battles fought 61 years ago...(The Battle of Saipan was from June 15 to July 9, 1944).

In addition, according to this, "China promoting Saipan as wedding destination"

Months after granting the CNMI an Approved Destination Status, the Chinese government is promoting the Northern Marianas as a wedding and honeymoon destination, a development that the Marianas Visitors Authority considers a milestone in its Chinese tourist market.