Report here from the Tehran Times: 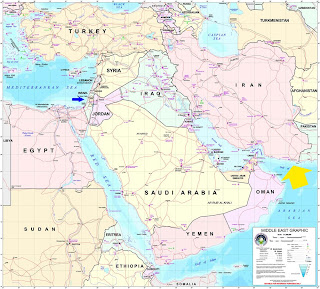 The Islamic Revolution Guards Corps Navy is totally prepared to escort Gaza-bound aid ships to protect them against Israeli attacks, the Supreme Leader’s representative in the IRGC Navy has announced.

“Enemies should be met head-on through a spontaneous international movement, and we should foil their evil plots,” Hojjatoleslam Ali Shirazi told the Mehr News Agency on Sunday.

“The Islamic Revolution Guards Corps Navy is ready to escort the peace and freedom convoys that carry humanitarian assistance for the defenseless and oppressed people of Gaza with all its strength,” he added. 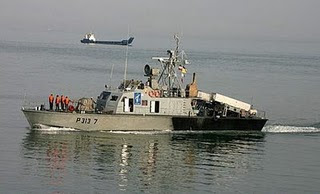 The IRGC follows Supreme Leader of the Islamic Revolution Ayatollah Seyyed Ali Khamenei’s orders, and if he issues an order in this regard, the IRGC Navy will mobilize all its forces to provide security for Gaza-bound aid convoys, he stated.

Presumably Israel is prepared to sink all the IRGC Navy ships that show up. It's a long transit from Iran to Israel. The blue arrow points to Israel, the yellow to Iran.

Some in Iran seem to feel this whole Gaza shipping hullabaloo is a sign of Israel's demise, as set out in this diatribe:


Iranian President Mahmoud Ahmadinejad said that the act of the "cancerous tumor," i.e. Israel, against the Gaza flotilla denotes the beginning of the end of the Israeli regime, and attests to its weakness. In a speech in the city of Ilam, in western Iran, he said that Israel had attacked the ship with a missile fired from an airplane, killing 20.
Ahmadinejad warned Israel's supporters in the region and its allies to stop their support for this "professional assassin" regime, because their support had made them collaborators in the Zionists' crimes. He said that Israel "should be aware that this [action] will lead to its end," and added, "Someone asked me why I no longer say Israel must be torn down... I said because there is no (longer a) need to say [this] – as this regime is already in the process of being destroyed."
Ahmadinejad added: "The absolute track of history is the elimination of oppression and arrogance. Accordingly, it is best that the supporters of the Zionist regime distance themselves from it. This is friendly advice. History shows that if they do not take this advice, the force of the nations will put them in their place."