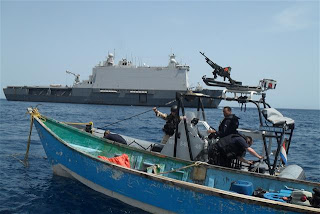 Last Friday, a German patrol plane, a Dutch warship and Maltese soldiers teamed up to grab some suspected pirates as set here:


. . . Dutch warship Johan de Witt, on which the Maltese soldiers are based, intercepted a skiff with six suspected pirates on board in the Gulf of Aden.

The skiff was detected by a German Orion patrol maritime aircraft as it was moving towards HNLMS Johan de Witt at great speed.

As the alarm was sounded on board the ship, an Armed Forces of Malta (AFM) security team rapidly prepared itself for action.

As soon as those aboard the skiff realised that they were dealing with a military vessel, they changed course in the direction of the coast. The Dutch warship fired a number of warning shots, after which the boat stopped and the suspected pirates surrendered. The AFM security team quickly secured the skiff and transferred those on board onto the navy ship.