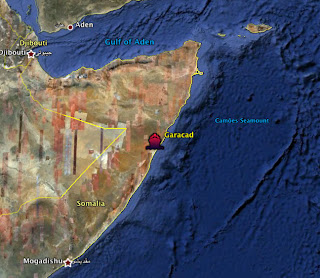 
Today at 1010 local time, the hijacked Libyan owned merchant vessel RIM reported that the crew had successfully retaken control of the ship. One of the crew members was seriously injured during the incident.

The incident took place south east of Garacad, off Somalia’s northern coastline. The closest EU NAVFOR warship, the SPS VICTORIA, was immediately tasked by the Force Commander Jan Thörnqvist, to meet up with MV RIM in order give medical assistance. SPS VICTORIA launched her helicopter immediately.
***
There were however, pirates in the vicinity who were attempting to impede the EU NAVFOR operation by utilising another hijacked vessel the MV VOC DAISY. When SPS VICTORIA’s helicopter approached the MV VOC DAISY she changed her course – no warning shots were fired.

It is believed that some of the pirates were killed during the incident; the ship is now under the control of the crew.

In other parts of the "pirate area" Hijacking of MV QSM Dubai in the Gulf of Aden:


In the early hours of 2 June it was reported by the owner of the MV QSM Dubai that a group of armed pirates had boarded the ship and taken control. USS COLE from CTF 508 (NATO) first reported that they had seen a person with an RPG on board. A coalition Maritime Patrol Aircraft was tasked to investigate the situation and reported that the ship was hijacked.

The MV QSM Dubai, a Panama flagged general cargo ship with dead weight of 15,220 tonnes and a crew of 24 comprising Egyptian, Pakistani, Bangladeshi and Ghanaian nationals, was in bound from Brazil when hijacked in the Internationally Recommended Transit Corridor.

Authorities decided to try and free the Panama-flagged ship by force after pirates refused pleas to surrender and instead killed the captain, said Said Mohamed Raage, who is the minister of marine transport and ports in the region.

I think there is some irony in this last report somewhere.

Meanwhile, USS San Jacinto (CG-56)has been out thwarting pirates, as set out here:

San Jacinto dispatched a boarding team, in two rigid hull inflatable boats, to perform an approach and assist visit on the Yemeni dhow, Al Jawat, and conduct a routine inspection.

When all of the personnel were mustered on the bow of the dhow, the team discovered one person hiding under a blanket and a hidden cache of four AK-47 assault rifles and four rocket-propelled grenades during a search of the ship.

The Yemeni Navy dispatched a patrol boat from Al Mukalla, Yemen, to take custody of the suspected pirates and spoke with the crew members to investigate the incident. The master stated his dhow had been under pirate control for one day only.

San Jacinto then got the double:

San Jacinto responded to a distress call from the M/V Avenue Beauty, which was transiting 90 miles north of Somalia when she reported that she was under attack by pirates. Upon hearing gun shots, the vessels master sounded the general alarm and directed the crew to execute counter-piracy measures which caused the pirate skiff to call off their attack and speed away.

San Jacinto quickly responded to the attack and followed the pirate skiff with her helicopter, Proud Warrior 433. Aboard the aircraft, Aviation Warfare Systems Operator 2nd Class Casey Halliwell tracked the pirate skiff on radar as it headed south toward the Somali coast at a high rate of speed. The skiff, with nine pirates aboard, failed to comply with Proud Warrior's order to stop. Aviation Warfare Systems Operator 2nd Class Corey Whittle fired warning shots across the bow and stern of the skiff, compelling the pirates to stop their vessel.

In the early morning of June 1, San Jacinto sent a boarding team with U.S. Coast Guard Law Enforcement Detachment and San Jacinto Sailors to the pirate skiff. The boarding team quickly took control of the vessel and searched the skiff and pirates, who had previously thrown their weapons, ammunition, and pirate paraphernalia overboard. The pirates were released in the skiff after the boarding team confiscated one engine and several gallons of fuel, ensuring they could reach shore while limiting their ability to continue piracy attempts.

An alert reader took note that the description of the location of Garacad in the article about the retaking of a ship by its crew was not exactly right so I fixed it.
Posted by Mark Tempest at 6/03/2010 08:10:00 AM