Proposal to Name a US Navy ship in the Honor of Lt. John William Finn, USN deceased Petition

There was a time when U.S. Navy destroyers, especially the Gearing-class destroyers, were named after Medal of Honor honorees and other heroes.

Now, it seems that the naming of ships may follow more political winds. 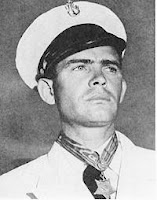 Be that as it may, with the recent death of of "the last living recipient of the attack on Pearl Harbor" there is a movement afoot to honor both him and the old tradition by naming the "next naval vessel" after LT John William Finn.

You can sign a petition to this effect at Proposal to Name a US Navy ship in the Honor of Lt. John William Finn, USN deceased Petition

Be It Resolved:
That the next naval vessel should bear the name USS John William Finn in recognition and honor of his selfless devotion to duty and the preservation of freedom.

We The Undersigned:
Call upon the Congress of the United States to draft a resolution supporting the naming of a United States Navy Ship the USS John William Finn.

Call upon the Secretary of the Navy to support this petition of the tax-paying people of these United States of America and name the next naval vessel to be constructed the USS John William Finn.

Others have suggested that the next Burke-class destroyer might be an appropriate place to start.

Sign the petition and drop an email to your Congressional representatives.
Posted by Mark Tempest at 6/01/2010 08:14:00 AM