Time for a National Geography Lesson 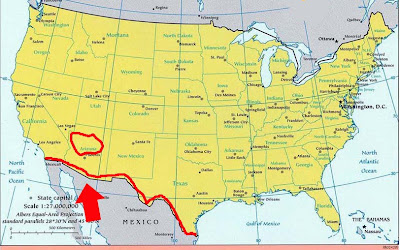 I'll take states that border on Mexico for $1000, Alex. Let's see, that's Texas, its neighbor New Mexico, California and, oh, what's that other one? Let's try Arizona, which would be right unless you are a county supervisor from Wisconsin, like Ms. Peggy West who, speaking about Arizona's immigration challenges, said:


If this was Texas, which is a state that is directly on the border with Mexico, and they were calling for a measure like this, saying that they had a major issue with, you know, undocumented people flooding their borders, I would have to look twice at this.

But this is a state that is a ways removed from the border ...

Yep, this self-styled "activist" compares federal law enforcement agents to the Ku Klux Klan. So witty in her preferred political circles where Mao, Stalin and "Che" are heroes to these "useful idiots." I suppose she just didn't have time to mention the Coast Guard, which also turns back would-be immigrants. Moron.
Posted by Mark Tempest at 6/26/2010 01:29:00 AM