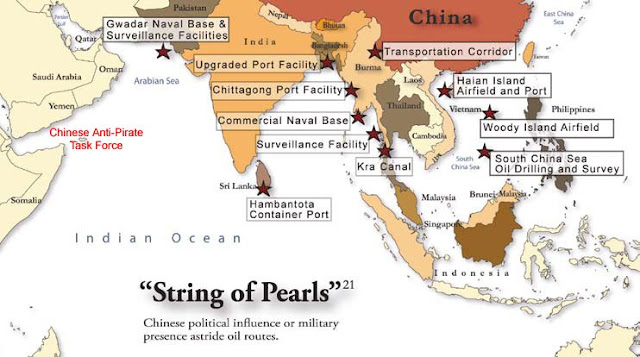 
Recent incidents at the naval encirclement of India, at Hambantota and Gwadar, and possibly Bangladesh, dubbed as China’s ‘string of pearls,’ put an end to the rapidly improving relations with India. China dismissed the theory, arguing that India built ports with ADB and World Bank loans, which some developing countries find difficult to obtain. China’s naval analyst, Zhang Ming, contends that India’s Andaman and Nicobar islands could be used as a ‘metal chain’ to block Chinese access to the Straits of Malacca, known as China’s ‘Malacca Dilemma’ and argues India is building an ‘Iron Curtain’ with its influence in the Indian Ocean islands, and ganging up with US on a defense framework. During the Second World War the Japanese built airfields in the Andaman Islands, and China worries that India could emulate this strategy, as well.
***
It has been said, ‘India is like boiling water, steam and froth on top but rather calm below’. ‘China is like boiling oil, calm above but violent and seething below.’ If an eruption does take place in one nation, it could be violent. The jury is out whether the Chinese top down approach will prevail over India’s rather slower and democratic bottom-up approach. But the competition for influence in the Indian Ocean region has begun.

It's short, so read it all.

An earlier post on China: Sri Lanka and the Chinese String of Pearls from which the graphic above appears - and the graphic is modified from that appearing the Joint Operating Environment 2008 to include the Chinese anti-piracy deployment off Somalia and in the Indian Ocean as referenced in the above article.

For reference about Ray Cline's "Power Formula" see here and here (at page 44).