New, Cheaper Littoral Fighters: Someone is going "EagleSpeak" in their thinking

According to the May issue of Marine News:


Horizon Shipbuilding, Inc. is in final negotiations for a two-boat contract for 180-ft multi-role security vessels. This vessel is based on Horizon’s 170-ft and 182-ft fast crew supply boats delivered in 2008 and 2009. The MRSV will be constructed of aluminum and is envisioned to be powered by four Cummins Q-60 diesel engines driving four Hamilton waterjets. Armed with machine guns and a 25mm bow mounted rapid-fire cannon, the MRSV will patrol the waters surrounding offshore oil fields, protecting them from terrorists, pirates and other threats. Armor plating will envelop the house as well as vital machinery spaces to protect the vessel from small arms fire. The MRSV will be capable of speeds in excess of 28 knots and will accommodate eight passengers in addition to the crew.

I don't know who the negotiations are with, but I think this is an excellent idea (as you might learn from visiting here, Multi-Purpose Offshore Patrol Vessels, Department of Cheaper Pirate Fighting, Department of Crazy Ideas: How about a cheap inshore fleet? and all the links therein).

Top drawing is from Marine News article and shows armed vessel. Lower photos are from Horizon Shipbuilding and show their 175' and 182' fast crew supply vessels.

Looks like they would be perfect pirate and inshore patrol craft.

UPDATE: DJ Elliot notes in the comments a similarity to some Iraqi Navy OSVs allegedly to be built by RiverHawk Fast Sea Frames LLC. See  here:


When Naval Sea Systems put out a solicitation for these vessels last year on behalf of the Iraqi Government, specifications included that they be a steel mono-hull design with a hull length overall at water line of at least 55 meters but not greater than 65 meters with a draft: not greater than 5-meters (planned depth of water at low tide of the Umm Qasr pier. Range was specified at not less than 1,500 nautical miles, speed as 16 knots and endurance: not less than 15 days.

Deck space was to be provided for one 30 mm gun and four .50 cal machine gun weapons stations. 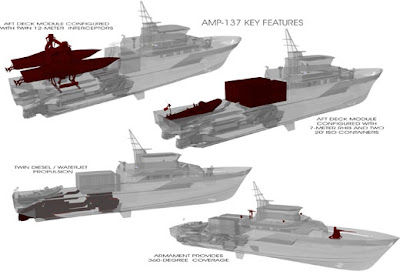