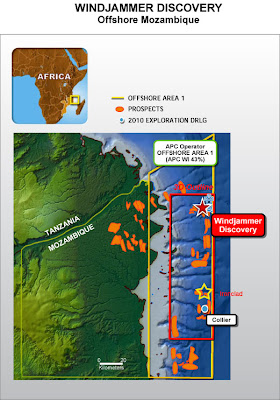 An exploratory well off Mozambique has penetrated 38 m of net oil and gas saturated sands in the upper of two Cretaceous fan lobes, signaling the first documented occurrence of liquids hydrocarbons in deep water off East Africa.
The Ironclad-1 well, operated by Anadarko Petroleum Corp. in Area 1 off Mozambique, is in the Rovuma basin 110 km south of the Windjammer dry gas discovery, drilled earlier in the same six-well exploratory program to 16,930 ft in 4,800 ft of water 30 miles off the coast ...

Map is from Anadarko, with my addition of a guesstimate as to the location of the Ironclad well site (yellow star). Click on them to enlarge images.

The Mozambique Channel is a chokepoint for shipping traffic off Africa. During WWII, the Japanese found it to be a "target-rich" environment as set out here:


Churchill telegraphed to Roosevelt: "A Japanese air, submarine, and/or cruiser base at Diego Suarez [on the northern tip of Madagascar, halfway between Cape Town and Colombo] would paralyse our whole convoy route both to the Middle East and to the Far East...." 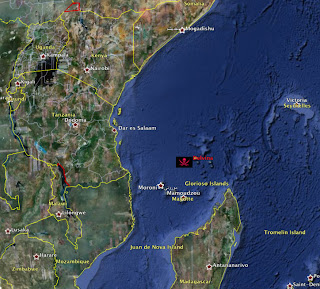 Now, of course, there are pirates in the waters north of the entrance to the Channel. UPDATE: In November 2009, MV Delvina was captured at the northern end on the Mozambique Channel as shown on the nearby map. See here and here.

The map below shows the area with the red arrow pointing generally at the location of these wells.

Further, there are disputed territorial claims to areas that now may be worth a vigorous defense (see here): 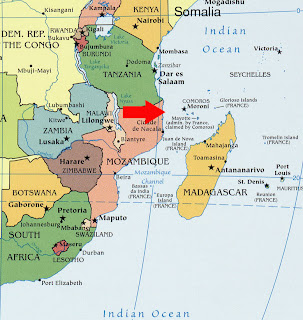 At the northern entrances of the Mozambique Channel occur a number of islands, reefs and submarine banks. The largest land masses in this area are those of the Comoros Islands. With an area of 2,170 km² this volcanic group consists of 4 main islands: Ngazidja, Nzwani, Mwali, Mayotte and several smaller islets that lie off the main islands.

Farther in to the channel occur a trio of widely separated coral reefs and islands that form overseas possessions of France: Bassas da India, Juan de Nova and Île Europa. These islands are strategically important — their ownership is disputed between France and Madagascar. All are small, flat and uninhabited. The islets of Europa and Juan de Nova are important habitats for migrating landbirds and breeding seabirds.

Northwards, lying at the entrances in to the Channel, lie the French-owned Îles Glorieuses (Glorioso Islands) and the submerged reefs of Banc du Geyser and Banc du Leven (Banc du Zelee), both of which lie in international waters.

Could get to be an interesting area. 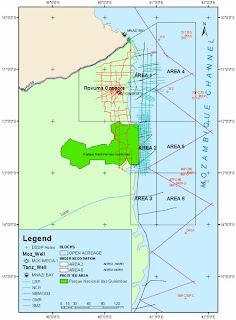 UPDATE: Info on the Rovuma Basin from the National Petroleum Institute of Mozambique (NIP) here.
Posted by Mark Tempest at 8/23/2010 10:23:00 AM