One More Thing to Worry About: "The Ice Island" 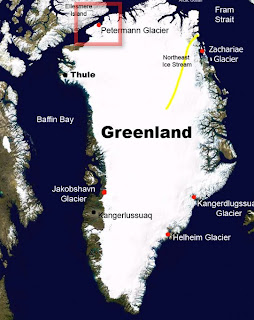 If you are short of things to worry about, here is a new potential threat to international shipping, albeit a remote threat - NASA reports an "Ice Island" that, under just the right set of conditions, could wander, in whole or in part, into some international shipping lanes, as reported in many places, including here


An island of ice more than four times the size of Manhattan is drifting across the Arctic Ocean after breaking off from a glacier in Greenland.

Potentially in the path of this unstoppable giant are oil platforms and shipping lanes — and any collision could do untold damage. In a worst case scenario, large chunks could reach the heavily trafficked waters where another Greenland iceberg sank the Titanic in 1912.

It's been a summer of near biblical climatic havoc across the planet, with wildfires, heat and smog in Russia and killer floods in Asia. But the moment the Petermann glacier cracked last week — creating the biggest Arctic ice island in half a century — may symbolize a warming world like no other. 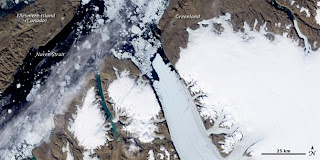 Yes, "global warming" etc. etc, according to that rather hysterical report.

Photo to left is "before" shot. Photo below is "after" shot. 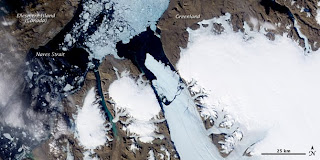 Icebergs calving off the Petermann Glacier are not unusual. Petermann Glacier’s floating ice tongue is the Northern Hemisphere’s largest, and it has occasionally calved large icebergs. The recently calved iceberg is the largest to form in the Arctic since 1962, said the University of Delaware.

Wait, you mean - this has happened before!?! 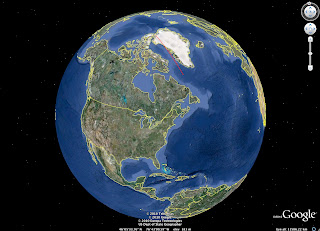 For your convenience, I GoogleEarthed the location of the Petermann Glacier and drew a line 1500 miles/2400 km from the glacier to the south. Click on the image to enlarge, the line is red.

Since the "ice island" has to negotiate the channel it sits in, the Nares Strait, Baffin Bay, Davis Strait and an on-coming winter before it hits sea lanes, it isn't really "drifting across the Arctic Ocean" as reported above, now is it?

Or, for you worriers out there, "Not Yet."

On the other hand, there may be some good news:


... the iceberg may have one positive effect – as it moves on its passage along the Nares Strait researchers say it may act as a huge ice dam, creating a barrier between Canada and Greenland and preventing further ice to escape.

Glass half empty? or half full?