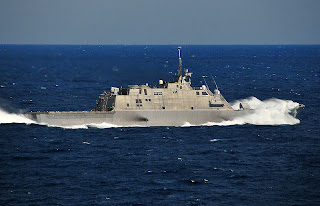 Duty Aboard the Littoral Combat Ship: ‘Grueling but Manageable’:


Designed to sail in close-to-shore waters, the 3,000-ton LCS is technologically unlike anything sailors have experienced before. But it remains to be seen whether advanced technology can make up for actual hands on deck.

“When we started this, we knew we had to learn more than one job. We knew we would have to be multi-talented. But I don’t think any of us had any idea how much we were going to have to know and learn and stretch ourselves to be able to get this ship to operate,” says Doyle, who has been with the LCS program since 2005. She served as the crew’s executive officer through Freedom’s build and commissioning process and became commanding officer in March 2009.
***
The crew works in three six-hour shifts. Sailors stand watch at their assigned stations for six hours and then have the next 12 hours off. But the caveat is that the ship conducts many missions that require more sailors than just one shift’s worth of watch standers, Doyle says.
***
Sailors only end up with about six hours of rest a day. “We try not to impinge upon those six hours. But sometimes we have to,” Doyle says. Emergencies, such as fire or flooding, require all hands on deck. Pulling in and out of port also involves the entire crew.

Timmons says he only has four to six hours of sleep every 24 to 48 hours. The work cycle on board is grueling but manageable, he says. He believes that LCS is the future of the Navy.

Most Navy veterans with ship service have done their share of long hours and long days with minimal rest. These were, for the most part, exceptions - not a design plan.

Merchant ships can get away with minimal manning because they don't have all those things to do that distinguish warships from them - like manning a combat info center, operating helicopters and the like.

Now, if you need more people to operate safely, where will you put them?

Another interesting part of this article is this from one of the commanding officers who was interviewed:


“We don’t have big fuel tanks though, so while we’re very efficient, we can’t go far,” says Edwards, who last month took command of Blue Crew and sailed Freedom back to her home port of San Diego.

That's just dandy. Send a squadron of these to sea and you'll need a dedicated logistics train to keep them fueled and fed.