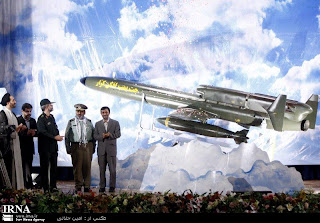 In an announcement suitably mocked in Danger Room's "Iran’s Robotic ‘Ambassador of Death’ is More Envoy of Annoyance (Updated)", Iranian scientists appeared to have labored long and hard to reinvent the German V-1 "Buzz Bomb" with just enough frills to make it somewhat modern. "Look, it carries bombs! It's an unmanned bomber!" Noah Shachtman suggests it might be able to carry 4 C-701 anti-ship missiles. Which means blowing one of these out of the sky kills 5 birds with one stone.The C-701 is a lighter missile akin to the U.S. Maverick missile.

According to Wikipedia, the C-701 is designed to take out smaller naval units of 180 tons or less. For reference, a modern Burke-class U.S. Navy destroyer displaces about 8000 tons.

Top photo: Via Aviation Week's Blog, Ares. The post is worth reading.

V-1 photo from The Museum of Flight.

Email ThisBlogThis!Share to TwitterShare to FacebookShare to Pinterest
Labels: Iran, The War with Iran