On The Dismissal of Piracy Charges

Probably there are some irritated prosecutors and angry sailors as US Judge Throws Out Piracy Charges Against 6 Somalis:


A U.S. judge has dismissed piracy charges against six Somali men accused of attacking a U.S. Navy ship off the Horn of Africa in April, although the group still faces several lesser counts.

Attorneys for the men had argued the defendants' actions did not amount to piracy because they did not board or take control of the USS Ashland in the Gulf of Aden or take anything of value from it. U.S. District Judge Raymond Jackson in the eastern city of Norfolk, Virginia agreed Tuesday, ruling that the government failed to establish that any of the "unauthorized acts of aggression" committed constituted piracy under the law. 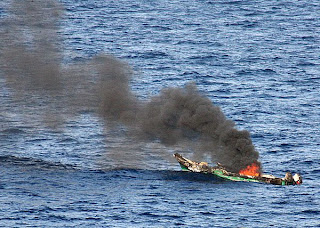 Prosecutors accused the six of opening fire on the USS Ashland from a small skiff. The U.S. vessel returned fire, sinking the skiff and killing one occupant. All others on board were captured. The U.S. Justice Department has declined to comment on the case.

Not really a stunning victory for the Somalis, there are still those "lesser charges" to face - though the threat of life imprisonment may be gone.

Shooting at people at sea is still some sort of crime even if those shots didn't result in capture of a targeted ship. 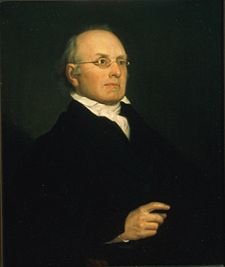 
There is scarcely a writer on the law of nations, who does not allude to piracy as a crime of a settled and determinate nature, and whatever may be the diversity of definitions in other respects, all writers concur in holding that robbery or forcible depredations upon the sea, animo furandi, is piracy. The same doctrine is held by all the great writers on maritime law in terms that admit of no reasonable doubt.
***
We have therefore no hesitation in declaring that piracy, by the law of nations, is robbery upon the sea, and that it is sufficiently and constitutionally defined by the fifth section of the act of 1819.

Robbery normally involves the theft or taking of something under the threat of force. In this case, as set out here, the would be pirates never got to the robbery part because their skiff was blown up before they had a chance to fulfill the crime. This is a different situation than that of the Somali who was captured on the Maersk Alabama.

In the cases involving ignorant men shooting at warships apparently in the mistaken belief they were some other sort of prey and then getting their boats blown away by counter fire, you have . . . assault and very poor target selection.

So, in the absence of a Congressional act that defines piracy to includes something more than "robbery upon the sea" the result, based on this case, which, admittedly, has been buried under dust for some time, not a surprise.

However, Congress could act and further define piracy, as Justice Story noted in 1820:


The Constitution declares that Congress shall have power "to define and punish piracies and felonies committed on the high seas, and offenses against the law of nations." (U.S. v Smith at 158)

If Congress wants to protect warships in situations like this, they can write the law to do so.

I suspect that in the golden days of yore, not many men who took an armed vessel under fire ever lived to be able to plead the defense offered up in this case . . .

UPDATE (19 Aug 2010): Having read the opinion (which you can download here) and reviewed the comments made here and here, let me note that there is controversy among lawyers far better read in international law than I about the applicability of the definition of piracy found in the 1958 Treaty on the Law of Sea (ratified by the U.S.) and/or the United Nations Convention on the Law of the Sea (not ratified by the U.S.).

(1) Any illegal acts of violence, detention or any act of depredation, committed for private ends by the crew or the passengers of a private ship or a private aircraft, and directed:

(b) Against a ship, aircraft, persons or property in a place outside the jurisdiction of any State;

(2) Any act of voluntary participation in the operation of a ship or of an aircraft with knowledge of facts making it a pirate ship or aircraft;

(3) Any act of inciting or of intentionally facilitating an act described in subparagraph 1 or subparagraph 2 of this article.

The court, in rejecting this argument, writes (at p.14):


However, the Court finds that despite the fact that the crime of piracy is generally recognized in the international community, Smith is the only clear, undisputed precedent that interprets the statute at issue. The international sources the Government provides are unsettled.

He rejects the 1958 Convention and the more recent UNCLOS (click to enlarge): 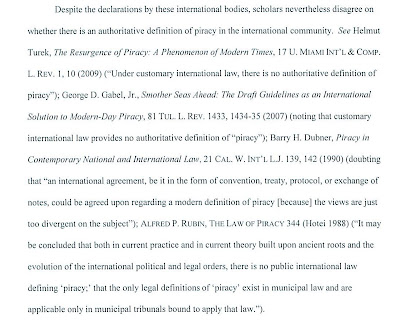 The experts find this to be wrong, Prof. Eugene Kontorovich quoted here:

Email ThisBlogThis!Share to TwitterShare to FacebookShare to Pinterest
Labels: Law of Piracy, Somali Pirates, US Navy