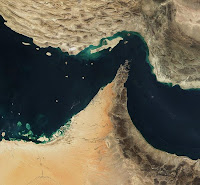 A couple of weeks ago, a Japanese oil tanker was damaged by something in the Strait of Hormuz - that something later determined to be an attack by explosives delivered as the ship was in transit - see Maritime Security: Tanker Damage in Strait of Hormuz Was Due to Explosives, Report Says for details.

Now comes a further, and disturbing, report about the incident, reported by Japan Today as "2 small ships detected near Japan tanker damaged in Strait of Hormuz":


Japanese authorities have found radar data showing two small unidentified ships near the Japanese tanker that was damaged in a suspected attack in the Strait of Hormuz in late July, transport ministry sources said Tuesday.

The data retrieved from the tanker’s voyage data recorder showed two small ships changing directions many times and making other suspicious moves, raising the possibility that they may have been involved in the purported attack.
***
The National Police Agency’s National Research Institute of Police Science is also checking substances collected from the damaged part of the tanker to see if they were components of an explosive.

The 160,292-ton tanker M. Star was damaged in a suspected explosion while sailing in Omani waters in the western part of the Strait of Hormuz on July 28, leaving one person slightly injured.

The radar data showed the small ships sailing parallel to the tanker, passing it and then turning around. They also showed that at some point, one of the ships disappeared from the radar, a move believed to indicate that it had moved to its blind spot around the tanker, according to the sources.

Again, the question is where did those little ships come from? And who is supporting such an attack?