Before there were highways or even cleared trails, there were rivers. The Romans used them (see here):


The Rhine river was the main highway of the Roman province and the boat's site was a river port.
***
The entire flat-bottomed vessel, a standard Roman type, would have been 22 to 23 metres long and would have had a beam of 3.5 metres and a capacity of 20 to 30 tons, suitable for cattle, stone and bricks, firewood or construction timber. 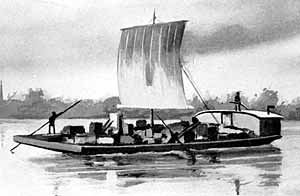 Flatboats were first introduced on the Connecticut River by European settlers in the 1630s. "Flatboats as developed by colonial builders were generally provided with a square mainsail set in the middle of the craft... and a topsail which was used only before the wind. ...When the wind was unfavorable these boats were propelled by poling. ...The flatboats [carried north] miscellaneous cargoes of merchandise, with iron, salt, molasses and much rum, and were returned down the river laden with shingles, potash and other products of the region... Household goods were also carried up for new settlers."


[From "The Upper Valley: An Illustrated Tour Along the Connecticut River" by Jerold Wikoff,
Chelsea Green Publishing Company, Chelsea VT, 1985.]

From A/V Geeks: Flatboatmen Of The Frontier (1941)


Presents a phase of pioneer agricultural economy in the early nineteenth century. Portrays Ohio Valley farmers as they fell trees, prepare the lumber, and build a flatboat to carry their produce down the river to market. Shows the farmers’ families helping them prepare for the trip, and the men on the first lap of their journey downstream.