Another successful interdiction of potential pirates by use of some "street smarts" in recognizing a potential threat, promptly investigating that threat and then acting to neutralize the threat by disarming it before any harm can be done to shipping. In this case, the EU MSC(HOA) reports the the EU NAVFOR Flagship FS DE GRASSE disrupts a Pirate Action Group:


In the early hours of 20 October, while conducting a patrol along the Somali coastline, the EU NAVFOR French Flagship FS DE GRASSE spotted and intercepted a pirate action group comprising of two skiffs and one whaler, thereby averting a future attack.

On spotting the suspect vessels, FS DE GRASSE immediately launched her helicopter to investigate. After several warning shots were fired, the suspected pirates stopped their skiffs and a boarding of the vessels was carried out by a team from the warship. 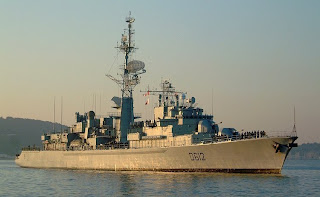 Shortly after the boarding, the helicopter saw and stopped the whaler, which is believed to have being used to provide logistic support to the pirate skiffs.

In total, twelve suspected pirates were on board the three intercepted vessels as well as large quantities of fuels and food, allowing extend time at sea. Quantities of weapons were seen to be thrown overboard as the boarding team approached.

The absence of flagrante delicto did not make it possible to pursue prosecution. The whaler was destroyed and suspected pirates were sent back to Somalia. This disruption has hampered pirate action and avoided highly probable attacks on merchant and vulnerable vessels.

Identification, interdiction and neutralization - ought to be a mission statement for the anti-pirate forces.

All photos of the counter piracy action from the EU. Enlarge by clicking on them. 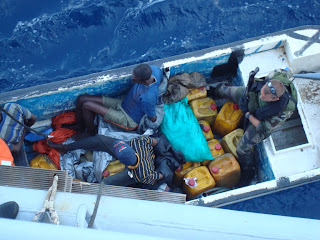 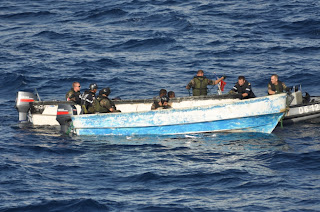 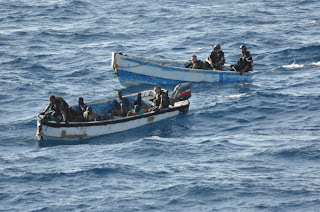