Somali Pirates: Another Fishing Boat Captured and Turned Into a "Mother Ship" and more... 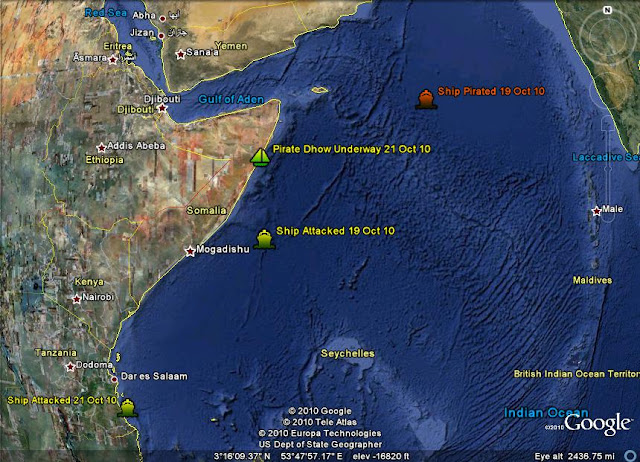 
FV Golden Wave has been pirated and maybe used by pirates for mothership operations. Golden Wave’s last known position was 03°03N 047°58E heading in a southerly direction. It is assessed that it may be heading for the seas between the coast of Tanzania and Madagascar.

Masters should note that the Golden Wave is a white hulled fishing vessel, approximately 50 metres long, with the registration numbers / Call sign DTAV4 painted in large black letters on the hull.

21.10.2010: 1600 UTC: Posn: 04:20.5S – 040:25.0E, Around 43nm east of Mombasa, Kenya (Off Somalia). Taking advantage of a moonlight night four pirates in a skiff chased and came alongside a product tanker underway. Alert duty officer heard the sound of the boat engine and upon investigation noticed the pirates attempting to board his vessel. Alarm sounded and speed increased. The skiff aborted the attack and attempted once again after 20 minutes. Due to effective preventive measures, the skiff aborted the attempts. A fishing vessel suspected to be the mother ship was noticed around 6nm off.
21.10.2010: 0825 UTC: Posn: 09:45.9S – 039:56.9E, Around 10nm off Tanzania coast. Eleven armed pirates in two skiffs chased and opened fire on a container ship underway. The master enforced all anti piracy measures and contacted the Dar es Salaam port authorities for assistance. Due to effective preventive measures, the skiff aborted the attempt. Vessel sustained some damages due to RPG fire. Crew reported safe. [Eagle1 note: Same as first NATO incident above but with more detail]