Join us Sunday at 5pm (Eastern) for Happy Birthday Navy from Midrats:


This Tuesday is the 235th Birthday of the US Navy. There is only one place to get your Navy on BlogTalkRadio - and that is Midrats! 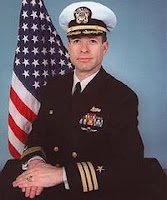 Since the end of US involvement The Vietnam War almost 40 years ago, there are just a few USN Commanding Officers who know what it is like for a warship under attack; one of the handfull will be our first guest, CDR Kirk Lippold, USN (Ret.). He was the Commanding Officer of the USS Cole (DDG-67) when it was attacked while in port Aden, Yemen 12 October 2000 - the 10th anniversary will be this Tuesday. We will discuss his experiences then as well as the work he has done since his retirement with senior military fellow with Military Families United, and any other topics that fold their way in to our conversation.

Our second guest will be from the shadows of the Navy EOD world, Steve Phillips. After graduating from Annapolis in '92, Steve found honest work as a SWO, but then transfered into EOD where he served as an Explosive Ordnance Disposal Technician at EOD Mobile Units Six, Eight, and Ten. He is the author of Proximity: A Novel of the Navy's Elite Bomb Squad which received a Gold Medal from the Military Writers Society of America in 2008. Some of the proceeds from Proximity support the EOD Memorial Foundation which provides scholarship to the children of EOD Technicians who made the ultimate sacrifice. If you like his work, Steve is currently working on a non-fiction account of EOD Technicians in our current conflict with a working title of Improvised: EOD Techs in the War on Terrorism. The first two of the chapters for the non-fiction work are available at: "The Birth of the Combined Explosives Exploitation Cell" and "A Remembrance of 9/11"

Email ThisBlogThis!Share to TwitterShare to FacebookShare to Pinterest
Labels: Midrats on Blogtalkradio, US Navy