On the afternoon of 10 October, the owners of the Panama-flagged MV IZUMI reported that they had received an automatically released distress signal indicating that the vessel was likely to be under pirate attack.

The Danish warship HDMS ESBERN SNARE of the NATO counter piracy force was dispatched to intercept and investigate.

In the early hours of 11 October the captain of the vessel made contact with the Danish warship, stating that pirates were in charge of the MV IZUMI.

More from the AP here:


The Izumi is operated by NYK-Hinode Line, Ltd and was traveling between Singapore and Mombasa, said Yuki Shimoda, an official at Japan's Transport Ministry. It was not immediately known what cargo the 14,152-ton Izumi was carrying.

Somali pirates now hold 18 ships and 389 crew. The sailors are not usually hurt or killed but can be held for months while their captors negotiate a multimillion-dollar ransom. 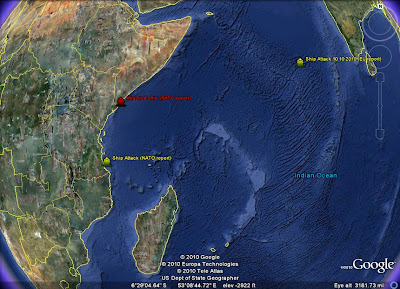 In addition to this ship capture, the pirates have unsuccessfully attacked other ships in the Indian Ocean, as is this attack on Sunday, 10 Oct 2010, reported by the IMB here and on the map nearby:

Four pirates armed with AK 47 and RPG chased and opened fire on a bulk carrier underway. The master enforced all anti piracy measures and contacted the 24 hour IMB Piracy Reporting Centre (IMB PRC) for assistance. Duty officer at the IMB PRC immediately contacted the relevant authorities requesting assistance for crew and vessel and also broadcast a warning to all ships. Due to effective anti piracy preventive measures onboard, the skiff aborted the attempt. All crew safe. Vessel sustained damages.

And a NATO warning here:

As the monsoon continues to abate in northeast and southwest Somali Basin and the Arabian Sea, the risk of pirate attacks on merchant vessels also increases. Temporarily poor weather, particularly along the central Somali Coast will continue to constrain pirates’ activities in the short term.

In the northeast Somali Basin it is likely that at least one pirated dhow is active in the shipping lanes as evidenced by the reported approach of a suspect skiff on the MV ZIM ATLANTIC approximately 200nm north east of Socotra Island on 05 Oct.

To the east, reporting indicates that a pirate mother ship is operating within an area of 200nm radius from 06 degrees 50 minutes north and 65 degrees 00 minutes east. We assess that this vessel is probably the FV TAI YAUN 227, which is under the control of pirates. Masters should note that the FV TAI YUAN 227 is also a white hulled fishing vessel, approximately 50 metres long, with the registration numbers BH3Z87 painted in large black letters on the hull.

Oct 10th MV Kavo Portland was attacked in position 04°49N 067°06E, but luckily evaded the attackers, it is assessed that the pirate action group is linked to the pirates onboard FV Tai Yuan 227. Pirates maybe active in an area of more than 100 NM from the position above, mariners are advised to transit the area with caution.