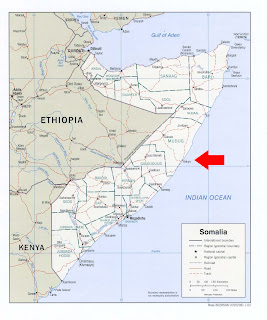 
Confrontation between well armored Somali pirates and foreign warships broke out around the coast of Hobyo district, a stronghold of the pirates in Mudug region of north Somalia according to witnesses.

Mohamed Ali, one of the residents of Hobyo district said that the fighting between the pirates and naval forces started as more forces with their warship attacked pirates based around Hobyo district on Monday morning adding that the wounded people were fishers patrolling in the areas where the clash happened.

“Where the clash started was about 30 kilometers to the coast of Hobyo. So one pirate was killed and three fishermen were wounded during the fire exchange between the pirates and forces of the warships who attacked the pirates,” said one of the residents of Honyo district.

Is this the same event? - EU denies role in Somalia helicopter clash


The European Union's anti-piracy mission on Monday denied that one of its helicopters was involved in a clash with Somali pirates in which four people were killed.

Residents in the village of Labad on Somalia's northern coast said pirates had shot at a military helicopter on Sunday night, which returned fire killing at least four people.

"That helicopter does not belong to EU NAVFOR," Lieutenant Colonel Per Klingvall, spokesman for the EU naval force, told AFP.

"We have not heard of any incident like this from other task forces," he said, referring to US and NATO operations in the waters around the lawless Horn of Africa country.

Abdi Yare, a pirate leader, said the helicopter fired one missile in response to the shooting, killing four people including fishermen.

The incident was confirmed to AFP by elders in Labad.

"The pirates were preparing to go for an attack when the chopper spotted them," said Abdulaziz Moalim Ahmed.

Another elder said the helicopter fired a missile after pirates shot at it.