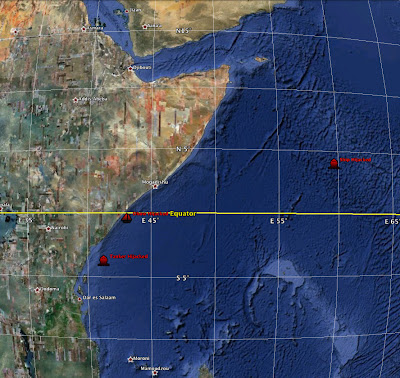 UPDATE: Pirates have been cleared from ship, as reported here and by NATO Shipping Center:


German military and international anti-piracy forces attacked a cargo ship being held by Somali pirates off eastern Africa and freed it Monday, but the hijackers got away, the German shipping company said.
***The German military freed the ship in cooperation with the anti-pirate mission Operation Atalanta, the shipping company said, adding that the ship was now on its way to South Africa as planned.

Nils Stolberg, the director of the Beluga-Reederei, said in a statement that one of the main reasons the military was able to free the ship so quickly was that the crew had trained for an emergency situation like this many times over the years.

"They sent out an emergency call, barricaded themselves in a special security room, shut off the fuel supply and the bridge and informed the military," Stolberg said. "This way the pirates could not bring the ship under their control or take the sailors at ransom."

And even more here:


Pirates had already left the ship by the time British frigate Montrose arrived at the scene Monday after steaming 15 hours to Beluga Fortune's aid. All 16 crewmembers were safe, the Beluga shipping company told the newspaper Weser Kurier.
The Beluga Fortune is now a success story of German shipping companies' standard procedures of shutting down all power and hiding the crew when a ship is attacked.
The ship's crew radioed at 7 a.m. on Sunday that pirates were attempting to board. They then immediately stopped the engine, blocked the fuel line and switched off all systems on the bridge - making it impossible for the pirates to move the ship.