The World Peace Foundation has released a report which claims that Kenya is a country whose firms are strongly responsible for the piracy taking place along the Somali coast. The Foundation is an international think-tank joining scholars, diplomats, lawyers, military officers and maritime partners collaborating to end piracy.

According to the report, some 1,500 pirates are active in Somalia, an enterprise organized in seven syndicates with a “few bosses” in charge of the associated ventures. Mainly, they are all headquartered in Kenya, Dubai, Lebanon, Somalia and certain European countries.
***
A maritime official on condition of anonymity admitted knowledge of a select few law, security, aviation and shipping companies in Mombasa and Nairobi involved in negotiating the release of hijacked vessels and the payment of ransoms.

Well. not really all that surprising, is it?

That the "money guys" behind the pirates are unlikely to be found in Somalia has long been understood - and an "all cash" ransom system almost necessitated paying protection money along the path to both the pirates, the local infrastructure supporting the captive ships and the big money boys. 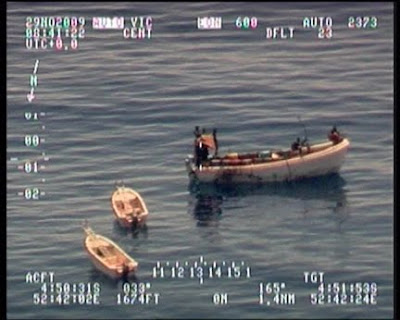 Someone is providing money for those new Yamaha outboards for the pirate skiffs . . .  and getting the motors to the pirate . . . and the fuel . . . etc.

In short, pirates have logistics issues, too, and in this world, money greases the wheels of support.


An accessory is a person who assists in the commission of a crime, but who does not actually participate in the commission of the crime as a joint principal.
***
. . . An accessory must generally have knowledge that a crime is being, or will be committed. A person with such knowledge may become an accessory by helping or encouraging the criminal in some way, or simply by failing to report the crime to proper authority. The assistance to the criminal may be of any type, including emotional or financial assistance as well as physical assistance or concealment.

I don't think the international law of piracy, such as it is, covers "accessories" to piracy. Some jurisdictions make accessories "accomplices."

Under U.S. common law, there are degrees of culpability, as set out here:


Anyone who intentionally participates in a crime or helps a criminal before or after a crime may be held responsible for the crime under accomplice liability.
***
To distinguish the criminal culpability of one from another, the common law developed specialized terms for the various ways in which one could be an accomplice. For instance, a "principal in the first degree" was the person who actually carried out a crime. A "principal in the second degree" (an "aider and abettor") was a helper who was present at a crime scene but in a passive role, such as acting as a "lookout." An "accessory before the fact" was a helper who was not present at the crime scene. While some state laws retain the common law terminology, few states make any distinction between the criminal liability of crime perpetrators and their accomplices. All can be punished equally, whether they actually perpetrate a crime or only help bring it about.
***
An accessory after the fact is someone who, knowing that a felon has finished committing a crime (usually the crime has to be a felony), helps the felon avoid arrest or trial. In most states, accessories after the fact face far less punishment than accomplices or principals.