Somali Pirates: Action by the Royal Navy and Marines

The Royal Navy recently has undertaken efforts to slow down the Somali pirates as set out here in an article devoted to describing the efforts of HMS Montrose in enforcing a semi-blockade of one area of the Somali coast:

. . . The ship was alerted yesterday to a gang of ten men acting suspiciously in a small boat off the coast of Somalia near to a known pirate camp. Their boat, loaded with ladders and fuel drums, was towing two other smaller vessels that have been traditionally used for pirate attacks against ships,said the UK Ministry of Defence.

HMS Montrose, which left HM Naval Base Devonport this summer, launched her Lynx helicopter and a boat of Royal Marines and sailors to investigate.

After the Royal Navy boarding team confiscated all the pirate gear, thus ensuring that the gang could no longer pose a threat to merchantmen, they were transferred to the remaining skiff.

Previous action by the ship thwarted an attack on a merchant ship.

The Royal Marines, as presented in an article by LCPL Ryan Gorman found in The Globe and Laurel (and forwarded to me by a kind reader) engaged in a little blockade work of their own as they undertook a raid against a Somali pirate haven: 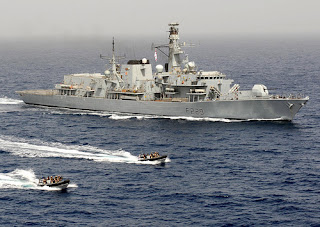 After lots of surface searches along the Somali coast we gained a lot of intelligence on the main pirate camps and identified some that had not been recorded before. We noticed that the pirates kept their whalers (large skiffs with an inboard engine carrying around 16-20 barrels of fuel on board) anchored just off the shore. They used them to store all their fuel, to refuel their skiffs, and packed them to act as mother vessels for launching attacks at sea.

To counter this capability a plan was formed to insert, stealing the whalers, tow them out into deeper water and blow them up, this became known as a small Commando raid.

The first raid was on two whalers positioned 200m from the beach. There was a lot of activity on the beach and a pirate camp was hidden in the caves behind the beach. As we approached the beach, some jack pirates retreated in a skiff, leaving one of their oppos in a whaler. As the team in the RIBs approached, they detained the pirate that had been left behind and started cutting the whalers loose and towing them away from the beach. It was decided to leave the whaler behind with the captured pirate in it. Before the whaler was left behind, Capt Eaton and LCpl Wilson smashed the parrels open with an axe and poured 1kg of sugar into each (supposedly this makes it unusable). The whaler that was towed away was then blown up by Lancaster's 30mm gun; it looked like a scene from a Hollywood film as a nice big fireball erupted!

Having completed over 50 AAVs and 15 boardings, we have been one of the busier teams in recent years. In total we managed to capture six pirates, blow up two whalers and sabotage another one (a total of around 50 barrels of fuel destroyed). This will definitely disrupt pirate operatios in the area for a while. The raids were an interesting new tactic for the Navy and it is the first time that any boarding team has conducted such a task in recent years. Hopefully the standard has now been set and other RMBTs can continue to sabotage, dirupt and imprison more pirates in the future!


The ship's helicopter was scanning the southern Somali coast for pirate activity when a suspicious vessel was seen not far from the shore and near a suspected pirate camp, some 100 miles south of the Somali capital, Mogadishu.

Initial reports from the helicopter crew stated seeing the kind of equipment commonly used by pirates on the vessel. TCG Gokceada's boarding team was quickly dispatched and boarded the suspicious vessel.

The seven-man boarding team found 21 drums of fuel, enough to sustain a small vessel at sea for many days, and a long ladder with hooks (the kind typically used by pirates to board large cargo vessels).
Approval was given for the boarding team to transfer the three personnel on the vessel ashore, to confiscate the fuel and ladder, and sink the vessel.