Somali pirates on Wednesday threatened to kill and sell the body organs of the 22 hostages held since late March if their ransom demands are not met in the near future.

Media reports say the information was received via a text message from one of the hostages. The message read that the pirates will kill them and then remove their eyes and kidneys in order to be sold, if they do not receive the asked ransom.

The pirate leader allegedly said that they will auction the captives' organs in an open bid because they will get more money this way than what they ask for ransom. The crew consists in 6 Indians, 9 Yemen, 4 Ghanaians, 2 Sudanese and 1 Filipino.

On March 29, the Panama-flagged vessel, MV Iceberg 1, was hijacked off Somalia. The pirates attacked the vessel approximately 10 miles outside the Gulf of Aden port. 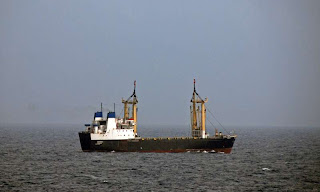 This comes along with threats to kill hostages on the Iceberg one by one or en masse as the pirates are tired of waiting for a ransom payment for the vessel. See here:


The Commanders of a group of pirates who are currently holding 24 persons captive including 4 Ghanaians in Somalia who were aboard the MV Iceberg 1 are agitated about the non-compliance to their demand and have threatened worse moments for the crew.

The captives communicated the intention of the pirates through a text message to Citi FM.

According to the pirates, if their demands are not met immediately, they would be forced to kill the captives and make away with some of their body parts which they say are more expensive than the ransom.

“Hi, this is to inform you that the hijacker of MV Iceberg 1 has come out unkind, inhuman and terrible decision last night. Immediately after one of their commanders arrived on board, he said officially that if they don’t get their ransom ASAP they will slaughter us and remove our kidneys and hearts which are even high than the cost of ransom they are requesting. Kindly forward this urgent news to all other embassies in Nairobi and human right watch worldwide ASAP”. Text message from the captives

More from Ecoterra (amidst their diatribes against the U.S. and others) here:


. . . It has transpired that the shipping company Azal Shipping based in Dubai refuses to pay any ransom and the ship is apparently not insured, though it carries very valuable cargo and it seems that the British cargo owner is in charge of the negotiations. The sailors have no more food, water or medicine from their stores on board. While all the seafarers are starving, a few of them already are getting sick, though none of the sailors suffers from a serious health condition yet. First Officer Kumar, Chief Engineer Mohamed and Second Engineer Francis also stated that they urgently need Diesel for the electricity generators. The crew requested again humanitarian intervention as before and has now received some supplies through intervention by local elders and a humanitarian group. Recently negotiations for the release started in earnest, but have not been concluded, because the captors consider the offer of the shipowner as unrealistic. According to the Chinese state-media newswire XINHUA, the acting director at the ministry of foreign affairs in Accra (Ghana) Mr. Lawrence Sotah said the ministry, in response to a petition by a relative of one of the hostages, had commenced investigations, but reportedly stated also that their location and reasons for the kidnapping remained unknown. "We do not have any information as to what the pirates are demanding, because the owners of the ship or the pirates themselves have not put out any information which will be helpful for us to know exactly what they want," he said. "Ghana’s mission in Saudi Arabia has been contacted to assist, " Sotah said. He said the ministry was working with other international security organization to get to the bottom of what he termed the "alleged" kidnapping. One of the sailors from Ghana was able to speak to a journalist back home and stated on 22. September: “They have given us a 48 hour deadline that if we don’t come up with anything reasonable they will kill some of us and sink the vessel. I am appealing to the Ghanaian authority that they should do something to save our lives because our treatment here is inhuman”.The vessel is now very close to the shore of Garacad.

Well, if the pirates are looking for a way to descend to a lower level of scum, harvesting hostage organs would pretty much do it.

On the other hand, if they want to make sure that every sailor on every ship they threaten has an incentive to fight back hard, this is a good approach.