Talking about the Future of the U.S. Marines on Midrats

Please join CDR Salamander and me as we convene Episode 54 "USMC at the Pivot" at Midrats on Blog Talk Radio: 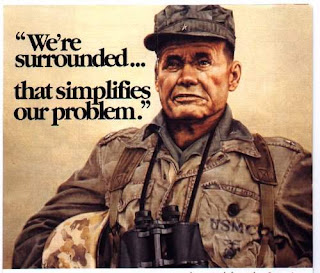 A decade as a land army, its future combat systems either canceled, delayed, or under pressure, and a Navy that finds itself getting shore-shy, what is the next step for the USMC? Our guest to discuss will be Dakota Wood, Lt. Col., USMC (Ret), a Senior Fellow at the Center for Strategic and Budgetary Assessments. He is currently involved in studying the operational challenges of irregular warfare, complex contingencies under high-technology conditions, and proliferated nuclear environments. Before his retirement, LtCol Wood served in a wide variety of operational and staff assignments, including the Corps’ Military Assistant to the Director of the Office of Net Assessment and, provided defense issues analysis support to the Commandant of the Marine Corps on assignment to the Strategic Initiatives Group. Following his retirement, he provided support to the DHS as Operations Officer for the National Biosurveillance Integration System.