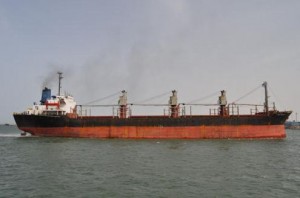 
During the afternoon of 20 January, the bulk carrier MV KHALED MUHIEDDINE K was pirated in the North Arabian Sea approximately 330 nautical miles South East of the Omani coastal port of Salalah.

The vessel is Togo flagged and Syrian owned and has a deadweight of 24,022 tonnes. Authorities were made aware of the attack when the master reported being fired upon with small arms and seeing pirates on board. All contact with the vessel was then lost.

The MV KHALED MUHIEDDINE has a crew of 25 (22 Syrian and 3 Egyptian), had registered with MSC(HOA), was reporting to UKMTO and was on passage from Singapore to Hudaydah, in Yemen.