Malaysian Navy "commando" team take back a tanker from Somali pirates after the tanker crew took shelter in a "citadel" as reported in Malaysian navy thwarts Somali pirate attack on MISC tanker:

Sources said the commandoes on board the Royal Malaysian Navy's Bunga Mas 5 were on a routine escort mission of MISC's chemical-laden MT Bunga Laurel and another LPG carrier out of the dangerous gulf waters enroute to Singapore.

But hours out of the danger zone, when the RMN would cease their escort, the pirates struck.

At least seven pirates began attacking the MT Bunga Laurel firing their assault rifles and machine guns when trying to board the vessel.

The crew of MT Bunga Laurel activited the alarm and the commandoes, which were about 30km away, reacted immediately by dispatching a helicopter to the scene.

The sources said the commandoes boarded the tanker and subdued the pirates.

They said the swift action saved the 20-odd Malaysian crew and the vessel. At least three pirates were injured in the shoot out with the commandoes.


State media said the tanker was headed to Singapore with a cargo of oil worth more than 30 million ringgit (10 million dollars) when it was hijacked.

Malaysian navy chief Admiral Abdul Aziz Jaafar said the commandos, who were manning a commercial vessel protecting shipping in the area, responded to the distress call. 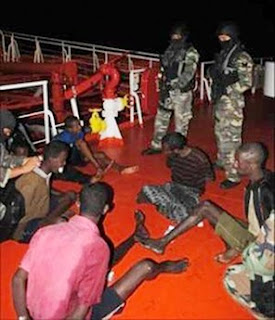 He said one of the navy's Fennec attack helicopters was also involved in rescue, according to the New Straits Times newspaper Saturday, which ran a front page picture of the captured pirates held at gunpoint.

"The attack helicopter kept the pirate's mother ship at bay with several rounds of machine-gun fire while the commandos boarded the tanker," he told the paper.

"The pirates were overpowered after a ... gun battle which saw three of them (pirates) suffering gunshot wounds," Abdul Aziz said.

He said the crew were uninjured as they had locked themselves in a safe room after setting off the ship's security alert system.