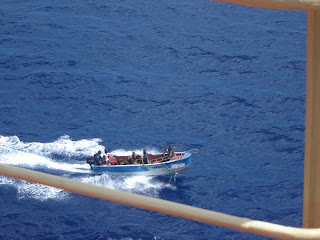 Or, as covered by a local news source, As 3,500 meteorologists meet, one man's forecast: Chance of pirates:


While his colleagues swapped probabilistic equations, James Hansen came to talk about pirates.

Hansen rolled out some math of his own Monday as he explained his work to estimate the likelihood of attacks off the Horn of Africa and other hot spots, using weather data and an understanding of pirate behavior.

"Usually, I'm doing theoretical stuff down in the weeds," said Hansen, a Seattle-area native and applied mathematician at the Naval Research Laboratory in Monterey, Calif. "This is the only project where I can actually show pictures of the impact," he said, projecting images of Somali boatmen armed with missile-launchers and automatic weapons.

Though news coverage of pirate attacks has waned, the problem has worsened, Hansen said. Last year, there were nearly 450 attacks, with 53 ships captured and 1,181 crew members taken hostage. The estimated economic impact of the raids is $10 billion a year.

Even knowing the general location of pirate bases and their favored target areas, it's challenging for Navy and other patrol vessels to be in the right place at the right time, Hansen said.

"The Indian Ocean is really big."

The Navy will begin testing Hansen's model next month to see if it proves useful in helping direct patrol vessels and warn commercial ships when the risk of attack is high.

Thanks to Chris who alerted me to the Seattle Times article and to Sid, who sent on the AMS bit.

As regular readers will have noticed, wind and wave reports have been a part of the analysis done here, by NATO, by the U.S. Office of Naval Intelligence and many others over the past few years of predicting (in rough terms) the potential for piracy activity off Somalia. If Mr. Hansen, et al have devised a better tool, perhaps a more directed prevention of piracy effort will follow. 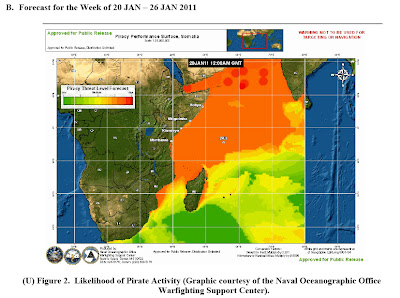