From the NATO Shipping Centre (NSC):


Gulf of Aden/Internationally Recommended Transit Corridor (IRTC). Locally heavier seas in the Gulf of Aden have probably been a factor in keeping down the number of pirating events reported in the IRTC over the past week, but with calmer seas now setting in, we can expect piracy to increase in this area over the coming weeks. On Thursday, 30 December, MV ELLY MAERSK reported a suspicious skiff operating in the central IRTC. The skiff was subsequently disrupted and is almost certainly pirate-related activity. There was no other significant activity to report this week in the Gulf of Aden/IRTC.

Arabian Sea/Greater Somali Basin. The weather in the rest of the Arabian Sea, as well as in both the northern and southern Somali Basin, remains favourable for small boat operations and hence pirate operations in areas not greatly affected by the Northeast (NE) Monsoon. The NE monsoon continues to keep sea states higher along the central, eastern coast of Somalia but has not greatly affected the deeper basin.

The number of pirated merchant and fishing vessels underway conducting piracy operations is assessed to be four mother ship pirate attack groups (or PAGs) underway in the Arabian Sea and greater Somalia Basin during the period. Specifically, a large number of hijacked merchant and fishing vessels are currently underway to conduct piracy operations.
***
This overall high level of piracy activity in the Arabian Sea and greater Somali Basin is expected to continue through next week. Pirates are obviously taking advantage of the more seaworthy ships to extend their range of operations out into regions less impacted by the NE Monsoon. We expect this trend to continue over the coming weeks, particularly during the holiday period through the New Year. 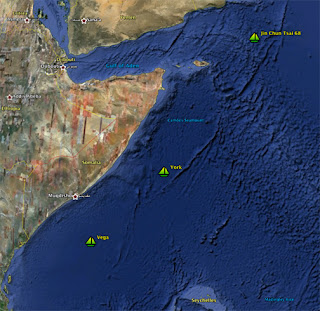 Looking ahead for weather conditions suitable for small boat operations like those conducted by the Somali pirates Saturday's weather as projected Weatheronline.co.uk, looks like a day to be ready for pirate attacks (click on map to enlarge): 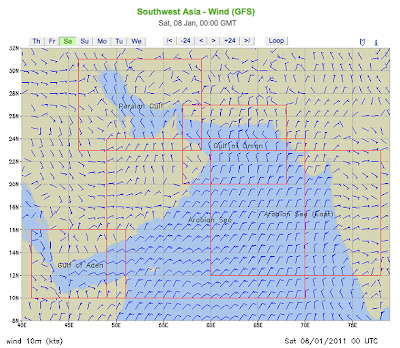 Finally, the NATO Alerts map - based on previous attack/incidents: 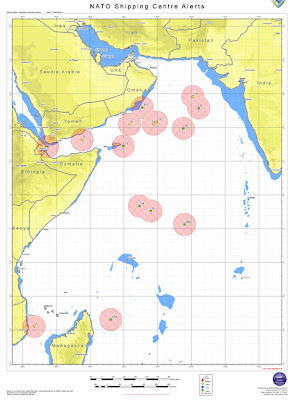