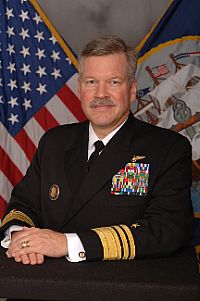 Reported as Navy admiral urges diligence in fight against pirates, but the points the Admiral makes are more than about diligence:


The U.S. Navy admiral responsible for countering the pirates operating from Somalia said Wednesday that the expanding threat should be addressed with the same rigor applied to counterterrorism.

That's particularly true when it comes to tracing the millions of dollars being paid to ransom captured sailors.

Vice Adm. Mark Fox said he had no "explicit intelligence" that the al-Qaida-connected al Shaba terrorists, who control most of Somalia, are benefiting from the ransom money, but noted that, "I'm loath to hope that there's not" a link.

Fox, the commander of U.S. Naval Forces Central Command and Fifth Fleet, said the United States and most of the nations cooperating in fighting piracy have used what he termed "the Western approach" to dealing with the ship hijacking, by primarily focusing on the safety of the crew members.

Because of that, with only a few exceptions, force was not used to recover pirated ships. U.S. Navy SEALs killed three pirates who were holding the captain of the Maersk Alabama hostage in 2009, and last year Marines raided the Magellan Star to capture the pirates and rescue the crew. Last week, South Korean commandos recovered a pirated ship, killing most of the pirates.

Fox said he cannot "take off the table" the use of force to resolve a hostage situation.

The admiral said the pirates' increasing use of larger hijacked vessels as "mother ships" to carry the small boats used to raid ships "is a potential game-changer" in the piracy problem.

The Somali pirates initially used skiffs that could not operate in bad weather or go very far offshore. Most of the early pirate attacks were in the nearby Gulf of Aden, the busy shipping route from the Suez Canal and Red Sea into the Indian Ocean. International naval patrols concentrating on that route have virtually eliminated hijackings in the Gulf, he said.

But by using the larger ships, the pirates now are capturing merchant ships more than 1,000 miles away, Fox said. "They are going where we're not," he said.

Because of that far-reaching activity, the number of seamen held hostage by the pirates has jumped from about 350 to 750 since he took command in the summer.

More on use of pirate mother ships here:


"The pirates are changing their modus operandi, taking ships which have been hijacked and sailing them back out into the Somali basin," said EU Naval Force Somalia (EU NAVFOR) spokesman Wing Commander Paddy O'Kennedy. "Their previous way of doing things was very dependent on the weather. Now they are using larger ships, the weather is having much less effect on their operations and they can travel further."

When EU aircraft overflew the vessels, officers at EU NAVFOR's headquarters at a British military base outside London say the pirates swiftly threatened by radio to kill the hostages or lined up prisoners on the deck with guns to their heads.

And a rather excited report on the threat potentially posed by the increasing level of Somali piracy here:


***
The piracy also threatens supplies of food and fuel destined for the UK. About 29,000 boats sail through the pirate-infested Gulf of Aden each year and a third of the world’s oil travels along the shipping lanes.
***
Once haphazard, piracy is now well-organised, with claims of dollar ransoms being paid into Dubai bank accounts. The cash is used to buy weapons and villas for the organisers. In Somalia, where there is no proper government or law enforcement, piracy is the main industry.

“There’s no doubt the threat is increasing,” says Cyrus Mody, of the International Maritime Bureau, which monitors attacks and helps to co-ordinate rescues. “The change in tactics, using hijacked vessels, gives the pirates a stable platform and a greater range. By using captured crews to sail ships they also have human shields. More than 30 hijacked vessels are in the hands of pirates. The area now under threat is simply too great for the world’s naval forces to patrol.”

There’s also evidence that the pirates are fitting more powerful engines to small skiffs, making them capable of speeds of up to 25 knots. And whereas in the past monsoon seasons and the accompanying rough seas brought respite, the use of mother ships allows pirates to operate in choppy conditions or sail to calmer waters. It is believed that at least eight captured ships are being used as floating bases.