2 dhows reported, one in position 1127N 06348E at 1033 UTC (observed involved in attack on MV NEW YORK STAR) and the 2nd in position 1119N 06337E at 1033 UTC with 2 skiffs onboard; other tripwires also observed.
ALY ZOULFECAR based on previous mothership activities, it is highly likely that the previously pirated ALY ZOULFECAR remains under the control of pirates and is carrying out mothership activities in the East African shipping lanes between Tanzania and Mozambique. 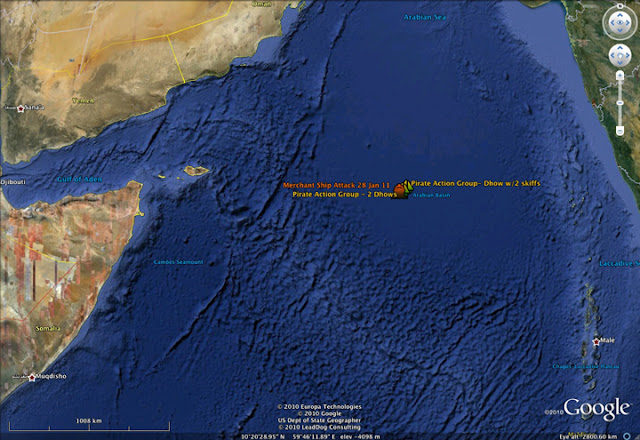 BELUGA NOMINATION has been pirated north of the Seychelles and is now headed to the Somali coast.
JIN CHUN TSAI 68, GOLDEN WAVE (also known as GEUMMI 305) and one of the PRANTLAYs have left the anchorage and are assessed to be used by pirates in mothership operations; no positions at this time

A week's worth of alerts:


Regarding all of the following warnings: Vessels are advised to use EXTREME CAUTION when navigating within 100NM of the positions in these warnings and maintain maximum CPA to all vessels acting suspiciously.