Taking it to the Somali Pirates: Dutch frigate opens fire on pirate ship 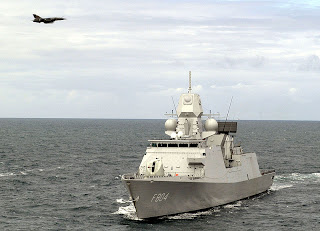 The Dutch frigate HNLMS De Ruyter has opened fire on a ship carrying pirates in the Arabian Sea, according to the Dutch Ministry of Defence.

At the end of the afternoon, a helicopter discovered a suspected pirate mother ship 40 kilometres away from the frigate. The ship did not respond to radio signals to identify itself and failed to stop when warning shots were given.

As the Dutch frigate could not be certain there were no hostages on board the pirate ship, marksmen destroyed a skiff on the deck of the mother ship rendering it impossible for the pirates to carry out attacks on other vessels. Pirates off the east coast of Africa often use smaller boats to attack merchant ships in the vicinity of mother ships.

The Dutch, once again, show some creativity (and some common sense) in fighting the Somali pirates.

UPDATE: Photos and a (Babelfish translation) from the Netherlands Defense site on the event:

Hr. M. The Ruyter acted yesterday in the Arab sea against a mother ship that it is used at piracy action for attacks on passing by sailing through ship.

Skiffs on board of mother ship, were made harmless with precision fire. Hr.Ms. The Ruyter warned mother ship with a shot for the stem.
At the end of the afternoon the Ruyter's helicopter discovered the suspected mother ship about 40 kilometres distance from Hr. M. The Ruyter. The ship suspected of piracy did not respond to radio calls and did not stop after giving warning shots with the ship's gun.

Because of the possible presence of hostages it was not possible overpower the mother ship. Instead, tt was decided to destroy the engine block-system of the skiffs by a sharpshooter of the special forces of the Marines.

By rendering these skiffs harmless, it is impossible for the pirates on board the mother ship to carry out other attacks. At present pirates in the whole Indian ocean use more and more mother ships as from they carry out attacks with skiffs on passing merchantmen.

The presence of hostages on board of the mother ships, makes fighting of this a complicated matter. Eliminating the skiffs is a way pirate activities are disturbed and eliminates the possible harm to hostages. ****