The crew of a Danish weapons ship have been kidnapped by pirates in the Gulf of Aden off Oman, but in an unusual departure from normal practice, the vessel was not seized, a report said Thursday. 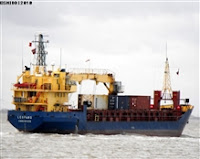 Sources told the TradeWinds shipping publication that the 2,000-tonne ship, The Leopard, was carrying "sensitive" cargo, believed to include weapons.

Vessels operated by the Leopard's Danish operator, Shipcraft, routinely carried nuclear items, although none were believed to have been on board this vessel, it said.

The six crew -- two Danes including the captain, and four Filipinos -- had been taken to a seized Taiwanese fishing vessel being operated as a mothership, the report added.

The ship had meanwhile been located and searched by the Turkish navy and no trace of any pirates or pirate skiffs had been found.