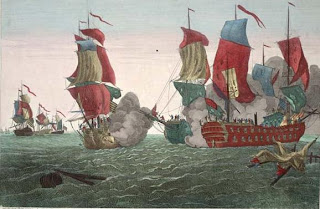 
No man is an island,
Entire of itself.
Each is a piece of the continent,
A part of the main.
If a clod be washed away by the sea,
Europe is the less.
As well as if a promontory were.
As well as if a manor of thine own
Or of thine friend's were.
Each man's death diminishes me,
For I am involved in mankind.
Therefore, send not to know
For whom the bell tolls,
It tolls for thee.

While I doubt Donne, former naval warrior, had in mind the firing of ship commanding officers, the message still fits. Fire one CO and the ripples flow throughout the fleet.

I will not debate Admiral Harvey's removal of Captain Honors from command.

But what lessons to draw from it?

As anyone who has served in the Navy knows, there is a fine line between adequate leaders, awful leaders and great leaders. Sometimes that line gets drawn by circumstance, as was noted in the scene in the the movie In Harm's Way where Captain Torrey is being relieved of command by Admiral Kimmel for hazarding his vessel:


Captain Torrey: My mission was to intercept and engage an enemy of greatly superior strength, sir. I could only take that one way: that my group was expendable.
Admiral Kimmel: I doubt if a court of inquiry will accept that. Captain, you're about to be caught in a vacuum between a peacetime Navy and a wartime Navy. Six months from now, they'll be making admirals out of captains who exhibit some guts. But right now, they're only reacting to the Pearl Harbor disaster, and punishment is order-of-the-day. Of course, you don't have to abide by what a court of inquiry decides. You can ask for general court-martial, get yourself a couple of crack sea lawyers, and make a fight of it.

Sadly, many of us are familiar with that "vacuum" - only from the reverse side - when the transition from a wartime Navy to a "peacetime" Navy occurs. During heavy wartime operations, combat leadership rises to the fore, mission accomplishment matters more than appearances and it is the job of combat leaders to inspire young men and women to exceed what they believed to be their limits to keep them and ships and aircraft on the line and fighting.

Rarely does a pure bureaucrat succeed in that environment. Bean counting takes a back seat to bombs on target. War operations do not take place like shift work at a warehouse or in a sales office or law firm. Real warriors rise to the top, "admirals {get made} out of captains who exhibit some guts."

Ah, but when the war winds down - well, then- out come the bean counters, the staff weenies and those who have disdain for warriors. Peacetime rules (sensible or not) are invoked  and past actions are to be judged by standards that were waived during time of war. Some warriors get shunted aside by the internal politics of the Navy as those internal politics get adjusted to the external politics of society at large.

The transitions can be a little rough. And the warriors? Well, there is a little gap in understanding, as John Spartan learned in Demolition Man, standards change:


Taco Bell Patron: What would you say if I called you a brutish fossil, symbolic of a decayed era gratefully forgotten?
John Spartan: I don't know... thanks?

So out there in the fleet, the ripples spread. 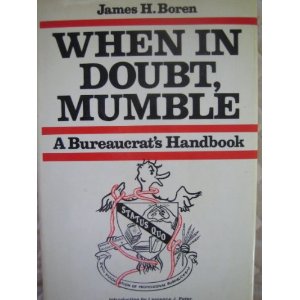 Wannabe admirals are burning old videos from 7th grade in which they uttered some now politically incorrect phrase that may have offended someone today.

It's a time of transition - and as set out in the classic (and long out of print) When in Doubt Mumble: A Bureaucrat's Handbook, "During a change in administration, keep a low profile."

I suppose Captain Honors missed the lesson on "keeping a low profile" long before a change in administration. Let that be a lesson to you.
Posted by Mark Tempest at 1/05/2011 09:08:00 AM