A South Korean cargo ship with 21 crew members aboard was hijacked in the Indian Ocean on Saturday apparently by Somali pirates, an official at Seoul's foreign ministry said. 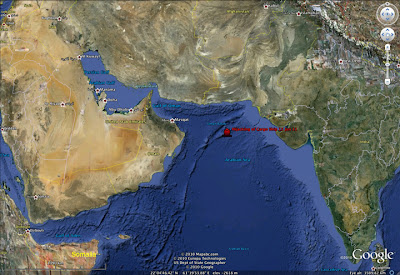 The ship was sailing from the United Arab Emirates toward Sri Lanka when it was hijacked in the waters between Oman and India shortly after noon (Seoul time), he said, adding that the vessel belongs to Samho Shipping based in the southern port city of Busan. 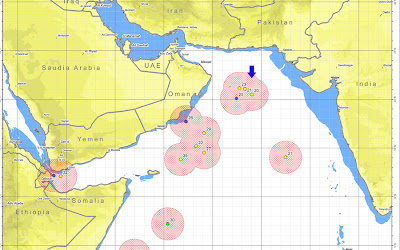 
On the morning of 15 January, the MV SAMHO JEWELRY was pirated approximately 350 nautical miles South East of the port of Muscat, Oman.

The 19,609-tonne Product tanker is Maltese flagged and Norwegian owned. No further details of the attack are known at this stage. MV SAMHO JEWELRY has a crew of 21 (Myanmar, Korean and Indonesian) and is carrying chemicals. MV SAMHO JEWELRY was not registered with MSC(HOA) and had not reported to UKMTO.

There are unconfirmed reports that the crew initially took shelter in a "citadel" (safe room) but that the pirates were patient and nabbed the crew after waiting 24 hours - see here.
Posted by Mark Tempest at 1/15/2011 09:07:00 AM