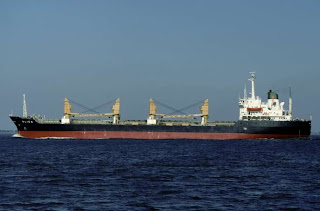 Reported by EU MSC(HOA) as MV BLIDA pirated in the Indian Ocean:


In the afternoon of 1 January, the MV BLIDA was pirated approximately 150 nautical miles South East of the port of Salalah, Oman. 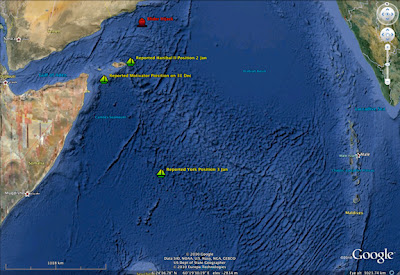 The 20,586 tonne Bulk Carrier is Algerian flagged and owned. The vessel was on her way to Dar es Salaam, Tanzania from Salalah in Oman at the time of the attack. No further details of the attack are known at this stage. MV Blida has a crew of 27 (Algerian, Ukrainian and Philippino) and is carrying a cargo of Clinker. MV BLIDA was registered with MSC(HOA) but had not reported to UKMTO. 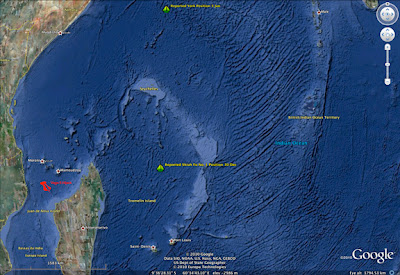 MAC(HOA) also confirms the capture of a fishing vessel off Mozambique:


The Mozambican flagged Fishing Vessel VEGA 5, which was previously reported missing by her owner, is now confirmed as being pirated in the waters between Mozambique and Madagascar.

On 31 December, the vessel was spotted near the Mozambique coast, approximately 200 nautical miles South West of the Comoros Islands, heading north. The vessel was towing what looked to be a pirate attack skiff and did not respond to any calls. There has been no further communication with the vessel.

The FV VEGA 5 has a displacement of 140 tonnes and a length of 24 meters. The nationalities of the 14 crew members are unknown.

NATO reports locations of suspected pirate "mother ships" (four of which appear to be active*) as of 3 Jan here:

NATO assessment as of 31 December 10:


The number of pirated merchant and fishing vessels underway conducting piracy operations jumped dramatically this week, with as many as seven mother ship pirate attack groups (or PAGs) underway in the Arabian Sea and greater Somalia Basin during the period. Specifically, a large number of hijacked merchant and fishing vessels are currently underway to conduct piracy operations. This list includes MT MOTIVATOR, which is probably returning to the northeast coast of Somalia after pirating MV EMS RIVER, and MV HANNIBAL II which probably remains underway conducting piracy in the northern Somali Basin/Arabian Sea. MV YUAN XIANG may also be underway en route piracy operations in the Arabian Sea. MV IZUMI has returned to the east coast of Somalia following a piracy mission in the Arabian Sea, while MV YORK is underway in the central Somali Basin, probably en route piracy ops east of 60 degrees east longitude in the far east, central basin. MV POLAR is most likely returning to the Somali east coast after pirating Taiwan FV SHIUH FU 1 off Madagascar on 25 December. MV POLAR is now probably located northwest of the Seychelles, while FV SHIUH FU 1 may be continuing piracy operations east of Madagascar. In addition to pirated merchant ship/fishing vessel PAGs, there are probably at least 2-3 Dhow PAGs also active in the Arabian Sea and northern Somali Basin.
FV SHIUH FU 1 was pirated by MV POLAR. Additionally, MV EMS RIVER was pirated by MT MOTIVATOR when pirates embarked in the Arabian Sea just off the south-central coast of Oman on 27 December. MV THOR NEXUS was pirated by a probable Dhow-based PAG on 25 December in the Arabian Sea, vicinity 15 North latitude, 60 degrees East longitude. MV SIGLOO STAR was also approached by a pirate group embarked aboard pirated MV HANNIBAL II in the Arabian Sea southeast of Salalah, Oman, but was disrupted by Turkey Naval Ship GAZIANTEP.
***
This overall high level of piracy activity in the Arabian Sea and greater Somali Basin is expected to continue through next week. Pirates are obviously taking advantage of the more seaworthy ships to extend their range of operations out into regions less impacted by the NE Monsoon. We expect this trend to continue over the coming weeks, particularly during the holiday period through the New Year.

In short, the pirates are effectively evading NATO/EU/CTF 15/Other naval vessels and operating in new areas by evolving their operations. They are inside the OODA loop of the anti-pirate forces.

Pictures are of alleged "active" mother ships. Click on maps to enlarge.