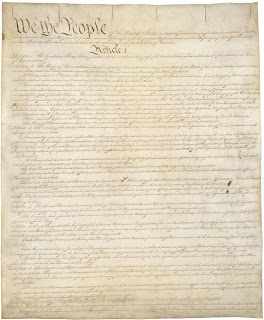 Worth reading by the conservative/libertarian opponents of the current executive branch.

Cloward and Piven, meanwhile, called for "a political crisis… that could lead to legislation for a guaranteed annual income and thus an end to poverty." They propose actions that "would generate severe political strains, and deepen existing divisions…. [B]y the collapse of current financing arrangements, powerful forces can be generated for major economic reforms at the national level." And: "Advocacy must be supplemented by organized demonstrations to create a climate of militancy."

A crisis is Obama's friend. An angry reaction is his ally. Disorder is his goal.

His mortal enemy (speaking tactically), on the other hand, is steady, sober, thoughtful, rational pressure by political adversaries who are willing to take the time to consolidate gains, explain themselves, reassure the public that it (the public) has nothing to fear from them (Obama's adversaries), and which constantly calibrates their words and actions to make it evident that they are keeping the moral high ground. A government shutdown does not fit this model. Forcing a debt crisis does not fit this model. Incendiary rhetoric doesn't fit the model, nor do all-or-nothing ultimatums.

In short, slow and steady. In fact, "relentless" may be a better term than steady.

1. Boeing may not be your favorite company, but what happens when a company's right to move to less unionized state is attacked by the federal executive branch? See Obama to Boeing: Drop Dead. Given that the argument is that the Boeing effort is purely a anti-union move and the NLRB has couched its complaint as responding to a Boeing "retaliation":


In its complaint, the labor board said that Boeing’s decision to transfer a second production line for its new 787 Dreamliner passenger plane to South Carolina was motivated by an unlawful desire to retaliate against union workers for their past strikes in Washington and to discourage future strikes. The agency’s acting general counsel, Lafe Solomon, said it was illegal for companies to take actions in retaliation against workers for exercising the right to strike.

Really? So it is thus okay to force Boeing to remain in higher labor cost Washington? What about all those companies that moved production offshore to take advantage of lower labor costs (much of it related to union activity)? Can we force them to bring it all back to the U.S.? Can we make the auto makers who located plants in "open shop" states to require union membership to make it fair, when one of the reasons they left Michigan and Ohio to begin with was to avoid union hassles? Can we make Ford move factories back from Mexico? Can we make U.S. airlines buy only U.S. made aircraft? Who will pay the price for the higher costs? Oh, the consumer? Big deal, I guess.

If Washington state doesn't like businesses moving out because of more "business friendly" labor laws, why doesn't Washington state modify its laws? You know the answer - the power of union votes and money.

What prevents the Washington workers from moving themselves to South Carolina?

By having the feds step in this manner, questions must be raised about all those other inter-state competitions (such as sweet tax deals and other incentives to induce a business to relocate from California or New York to North Carolina or Mississippi)?

What about things that might be attractive enough to induce residents of states that have high income taxes to move to states that have no or much lower income taxes (Florida, Texas, Tennessee, Wyoming)? Isn't that "unfair" to the high tax states? UPDATE: For all you living in New Jersey and New York who are planning to retire to Florida - better do it soon, before it requires a federal permit that shows your expected tax contribution to NJ/NY is so negligible that you can be allowed to move. All you multi-millionaires - good luck getting such a license to move.

Was the goal of the founders to let each state exercise its own path in determining its laws and regulations or to allow the national government to force its views on individual states. If the latter, then why have states? Let's get rid of all the excess money spent on state legislatures, governors, state courts, and state laws and constitutions and give have one national legislature, executive and judiciary running the whole show.  Create your scenarios.

This battle needs to be fought in the courts, slowly and carefully. You know, unless like the idea that all states should become New York.

2. Okay, how about demanding that companies doing business with the federal government give up their free speech rights? See Obama administration considers moves to limit anonymous donations:


The White House last week began circulating a draft executive order that would require companies seeking government contracts to disclose contributions – including those that otherwise would have been secret – to groups that air political ads attacking or supporting candidates.

This a "push back" against the U.S. Supreme Court decsion that allows corporate donations to political campaigns. See here:


“No sufficient governmental interest justifies limits on the political speech of nonprofit or for-profit corporation,” Justice Anthony Kennedy wrote for the majority.

Is this an intimidation tactic? "Get along to go along?" Will there be an impact on the flow of government business your way if it turns out that your corporation has donated money to the opponents of a current administration, even if the donations are totally legal? What do you think?

So, two examples of action/proposed action that could foment an outraged response. Time to take a deep breath and win the little battles that win the larger war. Slow and steady.
Posted by Mark Tempest at 4/25/2011 12:11:00 PM