NATO map shows hijacking in black, number 151 (under the red arrow I have added): 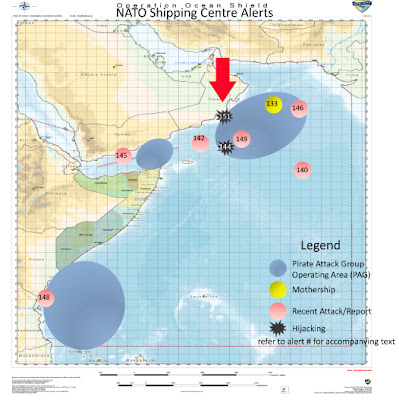 
In the early morning of 8 April, the General Cargo ship MV SUSAN K was pirated approximately 200 nautical miles North-East of Salalah, Oman; a location only 35 nautical miles from the Omani coastline.
The vessel was attacked and boarded by at least 10 pirates although exact details of the attack are not known at this time.
The Antigua & Barbuda flagged and German owned vessel was on its way to Port Sudan (Sudan) from Mumbai (India) when it was attacked. The MV SUSAN K has a crew of 10 (4 Ukraine and 6 Filipino). There is no further information about the crew at present.

More from SomaliaReport which reports the crew originally went to a citadel.

Ship photo by Jochen Wegenerfrom Shipspotting.com and used in accord with the terms of that site.
Posted by Mark Tempest at 4/08/2011 06:33:00 AM