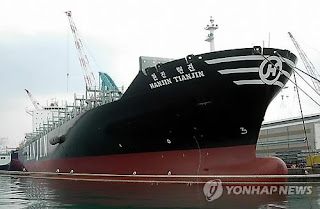 Earlier reports of the reported attack and following silence of the Korean ship Hanjin Tainjin let us wonder what happened (see here).

Now, a report the the crew has been found safe by the Korean Navy destroyer Choi Young, at All 20 Crew Aboard Hanjin Tianjin Found Safe:


All 14 Koreans and six Indonesians on board the container vessel Hanjin Tianjin that lost contact with its operator, Hanjin Shipping, early Thursday are confirmed safe.
The Choi Young naval destroyer from Korea's Cheonghae unit, which is part of the international campaign to wipe out piracy in the area, arrived at the site at around 5 p.m., Korea time, near the pirate-infested Gulf of Aden about 400 kilometers east of Yemen's Socotra Island.
Seoul's foreign ministry says the Korean troops found all 20 crew members inside the freighter's emergency shelter at around 6:40 p.m., after the unit's Lynx helicopter conducted a thorough inspection around the troubled vessel.
The 75-thousand ton ship en route to Singapore from Spain, had remained afloat after it came under some sort of an attack by pirates.
However, there have been no reported sightings of the pirates and the search operation inside the ship's cargo is to continue for some time to figure out what exactly happened when it sent out a security alarm call just before communication was cut off at 5:15 a.m.
Officials add that the international combined fleet's Turkish warship that reached the Panama-registered freighter some three hours after the alarm went off, had already informed Seoul there were no signs of the attackers.
And the 20 people were out of reach since the shelter was only equipped with a marine VHF radio.
Lauding the successful rescue of the Hanjin Tiajin and its crew, officials here in Seoul highlighted the government and shipping companies' joint efforts to maximize the crew's safety from piracy by mock training and maintaining traveling regulations.

Reports are that unnamed Turkish navy ship was about 80 miles away at the time of the attack here:


The commandos searched the vessel with 14 South Koreans and six Indonesians aboard and found no pirates aboard, officials said.

The Panamanian-registered ship owned by South Korea’s Hanjin Shipping Co. lost contact at around 5:15 a.m. Thursday when it was in waters some 460 miles east of the Somali coast. It was sailing from Spain to Singapore.

The crew members were found in the zone at around 7:30 p.m. and are currently in good health, officials said.

The commandos also discovered three live bullets of AK rifles presumed to be owned by Somali pirates and multiple footprints of bare feet, all of which indicate that pirates attempted to hijack the vessel, officials said.

A Turkish warship, just 80 miles away from the container ship at the time of the attack, first arrived at the scene to help South Korea’s rescue operation. It provided necessary information to the Cheonghae Unit before the 4,500-ton destroyer Choi Young of the unit arrived at the scene at 4:40 p.m., officials said.