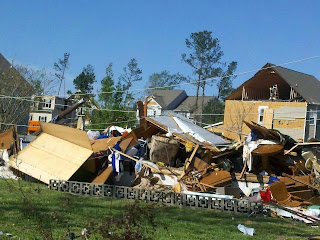 For the last couple of days I have been working as a volunteer for the Red Cross performing damage assessments of areas impacted by the series of tornadoes that hit North Carolina this past weekend.

You can view photos of some of the damage at Raleigh storm photos. I put couple up here.

Unlike the massive damage wrought over an entire region by a hurricane (a visit to Biloxi after Katrina was stunning because there was so much damage the mind had trouble processing it), this storm's impact was, as someone said, "40 miles long and 2 blocks wide." In doing our assessments, we would find the center of the damage path. Buildings damaged, trees down or limbs down. Drive a block over and everything was normal except that there probably was no electricity. Repeat for 40 miles from the southwest corner of our county to the northeast. Along the path, damage two blocks on each side, and on the next street over, perfectly normality. I am not a fan of  "mobile homes."

Along the storm's path, it blew along a shallow gulley and, in the process, threw off shattered pine trees to both sides. Downed power lines, trees broken over house, house speared with tree parts. 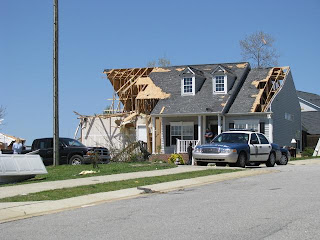 One house probably had 6 trees in or on it and none of them pines.

The pine trees shatter and pieces fly about, but the other trees, with shallower roots fall over - massive old trees smashing into the ground or house with all their weight. Anyway, one house, as I said, had a bunch of trees on it and these were intertwined with power lines. But, in one of those odd storm things, the house next to this wreck had absolutely no visible damage.

The streets were full of downed limbs, power crews, city inspectors and residents trying to recover . . . something. It smelled like pine. It looked like a sunny version of hell. And in the middle of this devastation, there were two houses undamaged - the one I mentioned above and the next one in line - mostly undamaged. In the driveway of this second house there was an elderly woman, maybe 80, maybe 75, I don't know - out there, surrounded by chaos, sweeping her driveway.

And I will remember it forever. 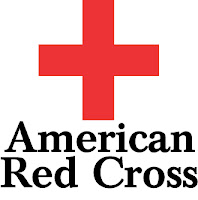 Email ThisBlogThis!Share to TwitterShare to FacebookShare to Pinterest
Labels: Disasters