Gun Running Scheme Broken Up in India UPDATE: Or maybe not? 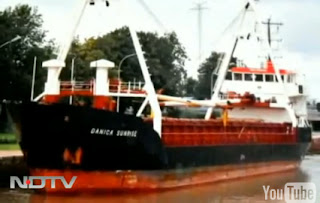 Reported as Two Retired Royal Army Soldiers Arrested in Arms Smuggling in India, but a Danish flagged ship lies at the heart of this saga:


The crew of the Danish ship MV Danica Sunrise, which was moving towards the Mumbai coast and captured by the Indian security agencies on Sunday admitted that it was carrying AK-47 assault rifles and ship sinking pistols on-board.

Information and confirmation to this effect was made by a senior coast guard officer that,“The crew members have confessed that they had two AK-47 rifles and two ship drowning pistols when they started sailing from Egypt, they had bought the fire arms from the open market there and they had receipts for the same. They sailed from Egypt to Kuwait and then sailed towards India where they said they had decided to wait for a few days and get in touch with local agents to see if they could get them any cargo.”
***
It is to mention that arrested eight crew of captured Danish ship MV Danica Sunrise included the two retired Royal Army soldiers working as security guards identified as Christopher Johnson and Steven Michael.