China and the Obama Pacific Front 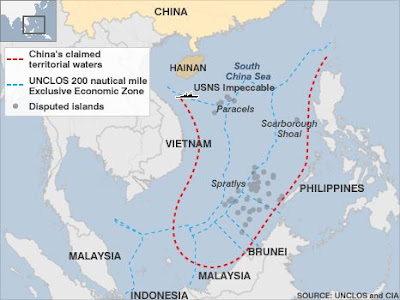 The revised United States Pacific approach, as announced by President Obama in his recent Remarks By President Obama to the Australian Parliament sounds tough and reassuring to our allies in the region:


Our new focus on this region reflects a fundamental truth -- the United States has been, and always will be, a Pacific nation. Asian immigrants helped build America, and millions of American families, including my own, cherish our ties to this region. From the bombing of Darwin to the liberation of Pacific islands, from the rice paddies of Southeast Asia to a cold Korean Peninsula, generations of Americans have served here, and died here -- so democracies could take root; so economic miracles could lift hundreds of millions to prosperity. Americans have bled with you for this progress, and we will not allow it -- we will never allow it to be reversed.

Here, we see the future. As the world’s fastest-growing region -- and home to more than half the global economy -- the Asia Pacific is critical to achieving my highest priority, and that's creating jobs and opportunity for the American people. With most of the world’s nuclear power and some half of humanity, Asia will largely define whether the century ahead will be marked by conflict or cooperation, needless suffering or human progress.

As President, I have, therefore, made a deliberate and strategic decision -- as a Pacific nation, the United States will play a larger and long-term role in shaping this region and its future, by upholding core principles and in close partnership with our allies and friends.
***
Let me tell you what this means. First, we seek security, which is the foundation of peace and prosperity. We stand for an international order in which the rights and responsibilities of all nations and all people are upheld. Where international law and norms are enforced. Where commerce and freedom of navigation are not impeded. Where emerging powers contribute to regional security, and where disagreements are resolved peacefully. That's the future that we seek.
***
My guidance is clear. As we plan and budget for the future, we will allocate the resources necessary to maintain our strong military presence in this region. We will preserve our unique ability to project power and deter threats to peace. We will keep our commitments, including our treaty obligations to allies like Australia. And we will constantly strengthen our capabilities to meet the needs of the 21st century. Our enduring interests in the region demand our enduring presence in the region. The United States is a Pacific power, and we are here to stay.

Okay, so far, so good. This speech and all the diplomatic stuff that goes with it, helps to stiffen the spines of our allies. Australia, "rejects China concerns on Australia-US ties," the Philippines, a treaty ally of the U.S. says,

China is reported to be taking two routes. First, it "plays down" freedom of navigation issues in the South China Sea while promising soft power as a counter to the U.S.:


China is “soft-talking to prevent more members of the Association of Southeast Asian Nations from joining the Washington-led containment policy,” Willy Wo-Lap Lam, an adjunct history professor at the Chinese University of Hong Kong, said by e-mail. “Placatory gestures are being bolstered by dollar diplomacy: More developmental and infrastructure aid will be pouring into Asean countries, particularly those that have not fallen for America’s siren song.”

China is seeking to reassure countries in the region after its moves to assert sovereignty in waters that may contain oil and gas reserves provided Obama an opening to expand strategic ties in Asia. Over the course of a nine-day Asia-Pacific trip that began Nov. 11 in Hawaii, the president announced plans to advance regional trade talks that don’t include China and called on leaders of the world’s second largest economy to “play by the rules.”


Chinese scholars and commentators lashed out with barely repressed anger at President Obama's trip to Asia, complaining that his efforts to shore up U.S. influence in Asia were by implication aimed at containing China.

The English-language China Daily in its lead editorial on Monday accused the United States of "scaremongering" over the perceived threat of China's rise and a signed Op-Ed article on Sunday declared, "East Asia not U.S. playground."

"The aim of America's strategic move east is in fact to pin down and contain China and counterbalance China's development," echoed Jiefang Daily, a Chinese-language version of the official Xinhua news agency, in a commentary on Sunday.

Now, here comes this odd little kicker to the President's strong talk from a meeting with the Chinese Prime Minister, after all the other strong talk:


US officials have praised China's attitude on South China Sea territorial disputes after talks between Chinese Prime Minister Wen Jiabao and President Barack Obama.
***
The meeting came after spats between Beijing and Washington over trade, currency and territorial rights in the South China Sea.

The sea holds potentially vast reserves of oil and gas, and is an important shipping route.

China lays claim to the whole of the sea, while other South East Asian nations claim parts of it.
***
US National Security Adviser Tom Donilon said the "informal meeting" between Mr Obama and Mr Wen focused mainly on economic issues.

Mr Donilon said the United States did not have a view on sovereignty on the South China Sea, but wanted to see shipping lanes remain open.

"We don't have a claim, we don't take sides in the claims, but we do as a global maritime power have an interest in seeing these principles applied broadly," he said.

How the National Security Adviser can say, "We don't have a claim, we don't take sides in the claims . . ." is beyond me.

Those are the sort of words that lead to the invasion of South Korea 61 years ago. If we are drawing a line in the sands of the Pacific, it has to be a much firmer line than that.

And there are challenges facing the Asia Pacific right now that demand America’s leadership, from ensuring freedom of navigation in the South China Sea to countering North Korea’s provocations and proliferation activities to promoting balanced and inclusive economic growth. The United States has unique capacities to bring to bear in these efforts and a strong national interest at stake.
Now that’s the why of America’s pivot toward the Asia Pacific. Now, what about the how? What will this next chapter in our engagement with Asia look like? It starts with a sustained commitment to the strategy we have followed in this administration, what I have called forward-deployed diplomacy. That means dispatching the full range of our diplomatic resources, including our highest-ranking officials, our diplomats and development experts, and our permanent assets, to every country and corner of the region.
Specifically, we are moving ahead on six key lines of action, which I have previously discussed in depth. They are: strengthening our bilateral security alliances; deepening our working relationships with emerging powers; engaging with regional multilateral institutions; expanding trade and investment; forging a broad-based military presence; and advancing democracy and human rights.
***
The United States takes very seriously the role that our military plays in protecting the region, including more than 50,000 U.S. servicemen and women stationed in Japan and South Korea. As this region changes, we must change our force posture to ensure that it is geographically distributed, operationally resilient, and politically sustainable. A more broadly distributed military presence provides vital advantages, both in deterring and responding to threats, and in providing support for humanitarian missions.

Some background at China and the South China Sea: Back to the "Cow's Tongue" and the links therein.