An announcement from the U.S. Department of State DoD-funded Integrated Maritime Surveillance System: 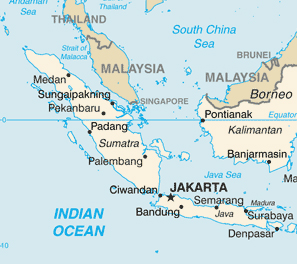 The fully operational IMSS enhances Indonesia’s ability to detect, track, and monitor vessels passing through territorial and international waters. This capability is crucial to combating piracy, illegal fishing, smuggling, and terrorism within and around Indonesia’s maritime borders. The IMSS helps achieve Indonesian and U.S. maritime security goals and exemplifies bilateral cooperation under the Comprehensive Partnership, along with setting conditions for increased multilateral collaboration with Malaysia and the Philippines.

The IMSS was officially handed over to the Government of Indonesia following an Operational Demonstration conducted in Surabaya on October 25, 2011. The IMSS is manned and operated by the Indonesian Navy, and consists of 18 Coastal Surveillance Stations (CSS), 11 Ship-based Radars, two Regional Command Centers, and two Fleet Command Centers (Jakarta and Surabaya)

The U.S. government remains committed to improving maritime domain awareness in the region and has allocated an additional $4.6 to ensure sustainment until 2014.

More on the IMSS from it's developer here:

The IMSS is a tightly integrated network of ship and shore based sensors, communications devices and computing resources that collect, transmit, analyze and display a broad array of disparate data including automatic information system (AIS), radar, surveillance cameras, global positioning system (GPS), equipment health monitors and radio transmissions of maritime traffic in a wide operating area. Redundant sensors and multiple communications paths make the system robust and still functional even in the case of a major component failure.