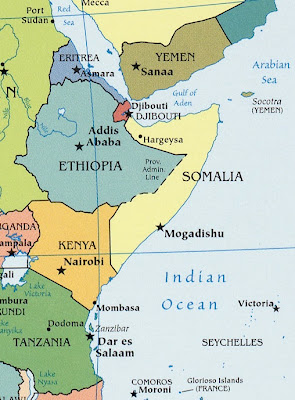 According to a report from the Kenyan Business Daily Africa, Kenya's punitive expedition into Somalia is having an impact on the business of the Somali pirates, as reported in Kenya’s Somali incursion cuts piracy costs in Indian Ocean:


Kenya’s operation against Al Shabaab in Somalia has helped reduce ransom demands on captured ships as pirates seek to close deals before a battle between the militants and Kenyan forces at Kismayo.
***
Shipping experts said that the amount of ransom demanded by pirates for vessels had dropped by about 50 per cent and could fall further in coming days once “Operation Linda Nchi” (Defend the Country) is completed.

“Initially, the pirates holding captive the Algerian flagged MV BLIDA were demanding $6 million to release the vessel and her multi-national crew. But a package of $3.5 million was delivered on the vessel and they freed it,” said Andrew Mwangura, the Seafarers’ Assistant Programmes (SAP) coordinator.

It is believed that the militants offer protection to pirates in exchange for cash, arms and logistics in a pirate value chain estimated to be worth between $4.9 billion and $8.3 billion.
***
Maritime sources privy to ransom negotiations in Mombasa said the military campaign had tilted negotiations in favour of vessel owners as pirates rush to close deals.
***
“Pirates are keener than before to make sure that negotiations for the release of at least nine vessels held in Somali are completed,” said a manager at one of a Mombasa-based shipping agents, who wished to remain anonymous. “It is clear the trend is due to the military operation in Somalia.”

Most of us who have been watching the Somali pirates for any time have noted that the key to their defeat was on the ground in Somalia.


Kenya and Somalia governments on Tuesday declared militant group Al-Shabaab, which has been terrorizing residents of the two neighbouring nations a "common enemy" and vowed to subdue its fighters.

In a joint communique issued in Nairobi after a meeting between the two governments in Mogadishu earlier on Tuesday, the two sides agreed to develop a common political and security strategy to address the threat posed by the militia.

"The two sides agreed to continue working together to stabilize Somalia and to stamp out the threats of the Al-Shabaab elements, especially terrorism, piracy, abductions, extortion, ransom demands and other international crimes," the joint statement said.

During the meeting, the two sides agreed to cooperate in undertaking security and military operations in the Lower Juba regions of Somalia and to undertake coordinated pre-emptive action, and pursuit of any armed elements that continue to threaten and attack both countries.

"In this regard, both sides agreed to revamp the joint mechanism to ensure enhanced cooperation and coordination in all aspects," the statement said.

This provides cover for the Kenyan incursion, which began shortly after intruders from Somalia began assaulting the Kenyan coast and kidnapping aid workers and killing and kidnapping tourists from beach resorts. See here for background. Al-Shabaab has also been active in Kenya, working to destabilize that country, too.
Posted by Mark Tempest at 11/11/2011 10:42:00 AM